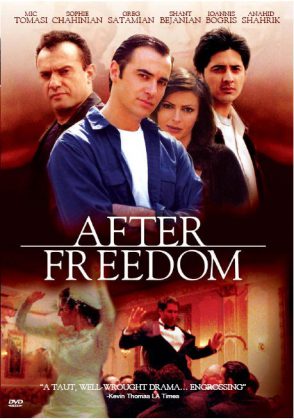 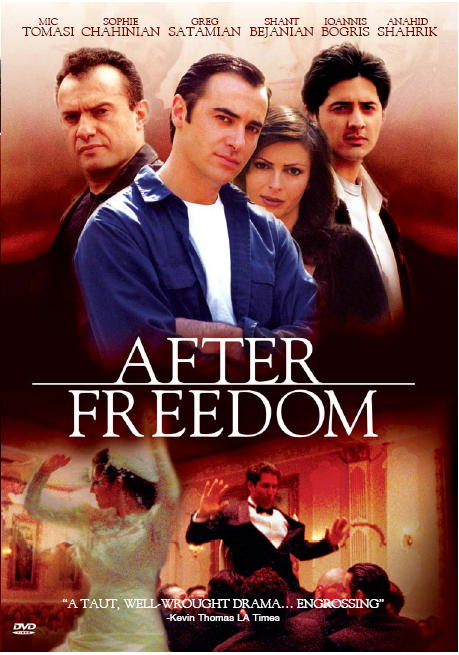 Vah? Babaian?s film “After Freedom” is released on DVD. You can purchase a copy from www.amazon.com. If you missed the film at the theaters, this is the time to see it on your home screen.

Babaian is an Iranian Armenian who has settled in the since 1976. The film was released to the public and got great reviews and is part of mainstream American movies but with an entirely Armenian theme. It could be rented also at Netflix, Blockbuster etc.

Writer-Director, Vah? Babaian, in his first feature film, has created a character-driven tale about the experience of Michael Abcarian, a young Armenian man living in , , as he confronts his growing sense of obligation to his father, Leon, who had sacrificed everything to get his family to . , in his late 50s, has just lost his wife and is forced to face his own survival issues — if he could only drive a car on an LA freeway, he might even be able to get a job, which would reduce his own guilt about being a burden to his son.

In this realistic portrait of a man with a tremendous desire to be responsible for himself and his family, he nonetheless must confront the conflicting moral codes represented by Avo, the blow-hard who defends his honor with force, and Ana, Michael' s fiancee, who continually goads him into facing the fact that maturity doesn't always include getting his own way. In Michael's struggle to “fit in,” he faces not only what it means to be on the outside, but at what price to gain entrance into respectability.

Another of Michael's friends, Mato, is in an even more confused position; he's desperate to bring his own brother here, and, so resorts to risky and illegal means to achieve that goal. Michael, whom Mato acknowledges loves him like a brother, takes a strong stand against it, but Mato, plagued by his youth, doesn't follow the advice… and has his final confrontation at the Mexican border.

In this web of relationships marked by the need to grow up, how can Michael achieve his independence of spirit, without guilt at leaving behind those to whom he feels he may owe his own strength?

Vah? Babaian is a Los Angeles-based filmmaker and has been involved in film production for the last fifteen years.

Vah?'s filmmaking style has been influenced in part due to what he has witnessed in his life. He had a normal childhood up until the time his family journeyed to . Born in , , to an Armenian family, he immigrated to in 1976 after spending three years in war-torn . Much of his perspective on life is drawn from his experiences in the many different countries where he lived. In 1976, at the age of 16, he and his family finally arrived in . However, the three years Vah? spent in changed his attitude and affected the type of story he wanted to tell and the kind of films he wanted to make.

While in , he was faced with many personal hardships due to his family's financial situation. He got a full-time job and put himself through school. In his first independently made narrative film, GENERATION APART, which aired on KCET, the Los Angeles PBS affiliate, he was able to explore through the film medium some of his viewpoints. As the writer, director and producer of the film, Vah? explored how the generation gap between children and their parents widens when a family begins to acclimate to a new culture. GENERATION APART was named as a semifinalist in the Dore Schary Awards.

Vah? continued to demonstrate his abilities to foster more challenging projects when he undertook to write a feature-length screenplay entitled AFTER FREEDOM. Once the script was complete, he then embarked on the challenge of obtaining financing for the film. Vah? spent from 1995 to 1999 raising funds to start production of AFTER FREEDOM. Finally he was able to start production, and the principal photography of AFTER FREEDOM was completed in the year, 2000. Now, with the finished film in hand, he is exploring the marketplace.

Vah? graduated from the Film Department at Art Center College of Design in where he received a Bachelor of Fine Arts with Honors. Vah?'s philosophy of filmmaking is to interact with the audience through a universal theme that addresses issues important to him.

I came to the in 1976 via and , because my parents wanted me and my sister to have more opportunity and freedom. As an Armenian, we've been wanderers for a long time.

Growing up in , I knew I wasn't going to stay there. I assumed I'd end up in , because I'd grown up with so much American culture–music and so on.

My father worked for BOAC, the British airway, and he was always telling us about American things.

In 1974, we had to go to to clear my father's paperwork to come to . We thought we'd be there for two or three months, but a civil war was just breaking out. It became a two to three year nightmare. When I was 14 or 15, I saw a group of soldiers put a gun to my dad's head because they didn't know if he was Christian or Moslem. Even though we were Christians, we had to prove it. When they saw my dad's passport, they asked how could we be Christian? He had to explain we were Armenian. That 15 seconds that they had him in another room will never leave me.

For four months, to survive, we literally ate nothing but beans and rice. So when I got to and saw the food people threw out in the school cafeteria, I realized I had to say something, I had to communicate.

My dad thought we'd get right out of to , but when he saw how long it took, I'm sure he asked himself if he'd done the right thing by taking us there. He used to walk around all night, watching us with a flashlight to make sure everything was okay. He slept a few hours in the morning. I wonder if he thought he'd made a mistake.

So, with all the sacrifices my father made, I figured I had to be somebody when I got here. Did I come to the just to eat better, just to not take a bullet? If I didn't say something when I was here, then I would fail my father and his sacrifice.

We spent all his retirement money–the money we thought we'd use in –in , so when we got to the , we had nothing–maybe $500 altogether. We had an address in , and a nice family took us in. Four of us, four of them. Eight of us living in a two-bedroom apartment. Because he knew English, he thought he could get a job here. That's when the insults started. Because of his age, he could only get odd jobs–laying carpet and things like that. He never complained in my presence, but I knew he was hurting. He was not a man who would express himself freely. My cousin later told me, after my dad died, that he had revealed how much it hurt him that he couldn't help me with my college tuition.

I had always wanted to make films, but I didn't really know what that meant. Once I got to the , I figured I'd just do it–even though I didn't know what to do. I had to express myself. I wanted to learn how to put my experiences into film and express them.

I researched film schools, and Art Center College of Design in sounded good. My dad only had small odd jobs, and my mom got up at 4AM to go downtown to sew. I watched my mom and dad in their 50s doing jobs that 20s-people were doing. So, of course, I couldn't ask them for money. I worked my way through school–had a fulltime job and fulltime school program at the same time.

My dad died right after I graduated. He never saw my work, even though he worked on my films on the weekends.

I took the money I had saved for my films and spent it on his funeral. I was lost for a little while, but I got it together pretty quickly and found a way to finish my work. But I did feel my dad went just a little too early.

Now, I've made AFTER FREEDOM. I don't want to make the regular clich?d “immigrant” film. What's important to me is I'm trying to portray what happens when a person thinks he's missed the boat. What happens after you get what you think you want? With AFTER FREEDOM, I have the chance to show, in an honest way, what I've seen in –portraying people that haven't been portrayed before, a neighborhood that hasn't been seen, a way of life that hasn't been shown.

Written and Directed by VAH? BABAIAN