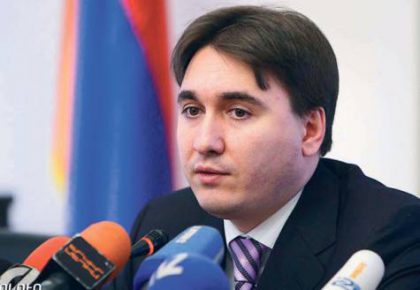 YEREVAN // Armenia, a largely Christian country, is seeking to deepen business ties with Muslim states, including its most significant Gulf-region trade partner, the UAE.

The Eurasian republic has historically had warm relations with most Arab states, several of which took in the Armenian refugees who fled Ottoman Turkey during the First World War. But most of the trade has been one-way.

?Traditionally, there has been a large amount of imports from the UAE to Armenia,? said Armen Kevorkian (Gevorgyan), the Armenian deputy prime minister. ?We want to change that situation. We want to bolster the economic content of the relationship.?

The UAE has been a uniquely important trade partner for Armenia because it has been able to provide the shipment of goods to the landlocked republic from the rest of the world.

At times, that has been a lifeline for the Armenian economy, which since 1993 has been hamstrung by the closure of its two longest land borders, with Turkey and Azerbaijan, in a long-running spat over the Nagorno-Karabakh region. In addition, the transport of goods to Armenia through its northern neighbour Georgia has been unreliable because of Georgia?s unstable relationship with Russia.

For overland transit to Armenia, that leaves only the southern route through Iran, with which it is at pains to maintain excellent relations.

The most important intermediary for the route has been the emirate of Dubai, a major transshipment and re-export centre for goods from around the world.

Products bound for Armenia, from machinery to paper, are shipped from the Jebel Ali container port across the Gulf to the Iranian port of Bandar Abbas, from where lorries carry them onwards.

Now the Armenian government is proposing to ship a range of local products, including high-quality fresh fruits and vegetables and building materials, south to the Emirates.

It also hopes for more direct foreign investment from the UAE and eventually to bid on consulting and services contracts there in sectors including telecommunications and energy.

Officials including Mr Kevorkian and Nerses Yeritsyan, the Armenian minister of economy, suggest the Emirates could benefit from Armenian know-how in physical and computer sciences, including nuclear and information technology.

?This country used to be the Silicon Valley of the Soviet Union. We designed and built computers and we were a country with particle reactors,? said Mr Yeritsyan.

The world?s best-designed computer chips were developed in Armenia, he asserted, which has attracted international technology companies to the country to set up research and development laboratories.

According to Mr Yeritsyan, Armenia also has sophisticated engineering capabilities, especially in IT, which has led the government to target building the world?s best internet and broadband network.

?Currently, we have between 5,000 and 7,000 IT engineers. The target for the next 10 years is to double our IT labour force and to attract high-tech companies to Armenia. The government is intervening at the level of entrepreneurial support,? Mr Yeritsyan said.

?We have 15,000 engineering students who are excellent in theoretical training. They only lack a US$5 million (Dh18.36m) to $7m laboratory for practical experience. [As an investment], that would be nothing for a country like the UAE.

?We believe that in 10 to 15 years, this country could become the knowledge laboratory of the world.?

Mr Kevorkian points to nuclear energy as another prime area in which the UAE could benefit from Armenian input. Armenians have decades of experience with operating and maintaining the Russian-designed nuclear plant installed in their country in 1976 and even with decomissioning the plant and restarting it.

It has also been suggested that Armenia could also help the UAE in accessing Russian markets, since it has had warm relations with Russia since the break-up of the Soviet Union and is comfortable with Russian culture.

Annual trade between Armenia and the UAE peaked at $500m in 2008, but sank to $300m last year during the recession. Mr Yeritsyan expects the 2008 figure soon to be surpassed.