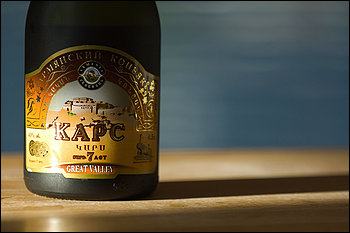 The bus stopped at the Armenian-Georgian border, and as the only American on board, I was ushered past soldiers lazily holding assault rifles to a shed where my passport was checked. A shirtless border guard who had been cooking soup moments before quickly printed a $15 entry visa from an HP LaserJet but flatly refused Georgian lari as payment. Luckily, I was able to bum enough drams from a stranger on the bus to Gyumri, Armenia's second-largest city, to cover the cost.

Rumors of an Asian brandy so good that the French once bestowed upon it the appellation “Cognac” had brought me to this podunk border crossing in the middle of the Southern Caucasus. In the land between continents, I was taking a side trip from Turkey and Georgia to visit Armenia and the famed Yerevan Brandy Co., purveyors of a “diplomatic brandy” that had reportedly kept Stalin and Churchill talking through the early days of the Cold War.

After waiting 20 minutes while our driver finished a game of backgammon, we were finally back on the road, watching sexy music videos on an old television set suspended from the ceiling. Karni, the woman who'd lent me the money for my visa, offered me apple slices, pastries and gum — gifts I was happy to accept on that long, slow rural road. The bus took us past soft rolling hills, ancient churches and an endless stream of garbage thrown from the windows of passing cars. After decades of communism and the Brezhnevian stagnation of the 1970s, conservation of resources is considered important here, but waste management is not.

Arrived in Gyumri, I found a large, drab city that must have been beautiful once. Most of the buildings of note date from the Russian imperial period, but their beauty has been worn away by time and a lack of fresh coats of paint. While the skies above the city center were denim and the clouds were among the most stunning I'd ever seen, everything around me seemed to be a shade of gray. Desperate for a bit of local color, I went exploring before meeting some American aid workers for dinner.

The first modern Armenian republic ended its short two-year life in 1920 in Gyumri after its defeat in the Turkish-Armenian War and its subsequent reannexation by Soviet Russia. Much of the city was destroyed in 1988 by the Spitak earthquake, which claimed 25,000 lives and leveled large sections of downtown. More than 20 years later, collapsed apartment blocks and broken buildings throughout the city are still waiting to be noticed.

On a nearby hill, the Soviet-era monument known as Mother Armenia looks out over the city, promising peace through strength, but most residents don't pay much attention to her anymore. After checking out a few pretty churches and the most dangerous power-relay station I'd ever seen, I hailed a cab and rode out to the Marmashen Monastery of the Armenian Apostolic Church, not far from town. On the way, we passed a large, bustling Russian army base and a long stretch of forgotten apartment buildings — a graveyard of concrete and rusted steel beams along the main road.

The monastery's main church, built 1,000 years ago, is surprisingly well preserved, considering the state of Gyumri. The cab driver and I walked around the complex as he took me to a stream feeding into a small gorge that cut its way through the valley. With carelessly dumped household garbage strewn at his feet, he smiled and said, “Ochen krasivaya, da?” (“Very beautiful, yes?”) Then he tossed his cigarette butt into the water, just one more piece of someone else's problem.

That night I heard the good and the bad about living in Armenia from the aid workers. Like many of its neighbors, they told me, Armenia is a conservative, religious nation that's sometimes difficult to understand. Though innately hospitable, the people can seem standoffish at first, or downright depressed. The country is still struggling to overcome high unemployment and corruption as it attempts to find its way out of a Soviet breakdown nearly two decades old. That, a fierce regional grudge with Azerbaijan and a disagreement of genocidal proportions with Turkey have shrouded the populace in a sense of malaise.

We were eating surprisingly good, farm-fresh fish at the hard-to-find Fish Farm outside town. The Americans were interested to hear that I was on a quest to taste Armenia's famous brandy. “Counterfeit bottles of that stuff are almost more common here than counterfeit bills,” said Scott, the aid worker I was staying with. For the next several hours, we drank mediocre beer and talked about mundane things. One common experience my companions drew my attention to: local youths' habit of dubbing every American “Johnny.”

The next morning, I set off for Yerevan. Karni, my new friend from the bus, met me at the transit station and insisted on giving me bars of Russian chocolate before saying goodbye. A taxi driver smooth-talked me into sharing a ride with a young soldier wearing a crisp new uniform; we rode the two hours to the capital in complete silence. When we got there, the first teenager I saw came up to me shouting, “Hey, Johnny, Johnny, Johnny!” The giveaway must have been my being tall, pale and stupid enough to lug around a brightly colored, 60-pound backpack.

A far cry from Gyumri, Yerevan is a modern city of more than a million people, a third of the country's population. Posh stores occupy tree-lined streets in the central core where the absurdly wealthy have built high-rise apartments that the average Armenian could pay off in just under 500 years. More money is spent than made here, as many Armenians rely on family members who work abroad for their daily bread.

There are three major sides to Yerevan, each with its own charm. One is poor but proud, another culturally rich and a joy to discover, while the third is flashy but flat and filled with gold chains and fancy, pay-as-you-go cellphones for show. Because accommodations in Yerevan can range from moderately inexpensive to exorbitant, I walked north past high-class restaurants and a block of empty luxury apartments to Opera Square and the Anahit Stepanyan Guest House, which occupies the top floor of a beautiful 1950s Soviet apartment building that formerly housed the city's artists. Stuffed with toiletries on every shelf, the two dorm rooms and shared lounge sport wonderful abstract art created by the owner's father. 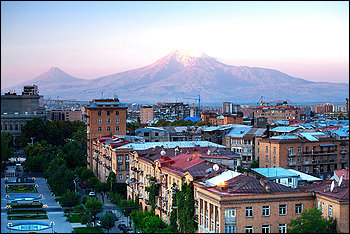 After a shower and a quick visit to a bunkerlike spice market downtown, I decided to pay my respects at the city's Genocide Memorial before lifting a glass to Armenia herself. Just west of the city center is the memorial called Tsitsernakaberd, dedicated to those who died while being deported from what is now Turkish territory in the dissolution of the Ottoman Empire in 1915. Armenia claims it lost 1.5 million people in a deliberate act of genocide; Turkey insists that the number of deaths was far fewer and the result of civil war and unrest.

But the Armenians know what they know. The first thing you see at the memorial is a 144-foot-tall granite stele, split in two. Symbolizing the dispersion and ultimate survival of the Armenian people, it rises from the hill next to a 12-sided basalt sanctuary that guards an eternal flame. Nearby is a museum housing documents and pictures from many nations that speak for the Armenian dead and bear witness to what happened. Moved, I walked around a bit, lost in thought, before realizing that I was late for another tour — the tour I'd come for — a mile away.

With Mount Ararat (Armenia's national symbol, but now in Turkey) looming in the distance, I ran the wrong way around the Yerevan Brandy Co. before I found the front door. Ten minutes after my scheduled appointment, an attractive tour guide peeled me off a now sweat-sticky sofa and led me through a small museum, a distillation room and a large open space that houses barrels of brandy that have been presented as gifts to various heads of state. She pointed out those designated for former Russian presidents Boris Yeltsin and Vladimir Putin, as well as others. The barrels remain with the company until the brandy has reached the age selected by the recipient; then the barrel may be picked up by the owner or his descendants. Armenian brandy was Churchill's favorite, and it's said that Stalin sent him up to 400 bottles a year. We walked past a 100-year-old bottle of seven-year brandy, the guide explaining that brandy doesn't age after bottling, as it's only the barrel that imparts any flavor. Interestingly, the age of a brandy is an average of what is used in that particular blend.

My tour of the factory ended happily in a wood-paneled tasting room with three glasses of brandy — a 3-, a 10- and a 20-year. As I sipped and tried to evaluate the distinctive qualities of each, my guide told me about the Paris International Exhibition of 1900. That was when an early brandy made by the company won the Grand Prix in the City of Light, and the right, at the time, to be called a Cognac. Since then, history has been tough on Armenia, but its brandy has always found a home on the poshest Russian shelves. Today, owned by Pernod Ricard, the Yerevan Brandy Co. is again reaching beyond the former Soviet Union and proving that its product is a world-class brandy.

And perhaps one day again, a Cognac.

* Guthrie is a Seattle-based freelance writer.