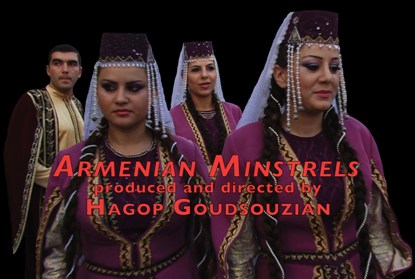 Asbarez?s Georges Adourian caught up with the director to discuss his new film and his passion for filmmaking.

Below is the interview:

What is your new film about?

One of the first people I met in Armenia was Professor Alina Pahlivanian. As we were talking about the essence of Armenian folk music she stops in the middle of the conversation, picks up the phone and calls someone, “Tovmas I have a guest from Canada can you arrange two tickets for your concert.” She hang up looked at me and said you are going to a concert tomorrow evening.

The following night I went to the Aram Khachaturian Concert Hall, there must have been a thousand people waiting to get in, I said to myself “What is going on?” We sat in a sold-out concert hall and I started taking pictures of the chandelier, the walls and then all of a sudden the crowd started applauding and for the next three hours I was totally in awe. I walked out of the concert hall with one thing in mind I have to meet Professor Tovmas Poghosyan and do a film on his Sayat-Nova Minstrel Song Ensemble and some Minstrels.

I soon learned that Professor Tovmas Poghosyan had singlehandedly revived this ancient and dying art form with a seven hundred year history. What is interesting, he has created a complete environment, a school, a recording studio, a research and cataloguing center, an association regrouping Minstrels or Ashughs as well as the ensemble. While filming in a Minstrels? home, I remember asking her to illustrate how she writes, she takes me to another room and we start, while filming I realized she was not just showing me how she writes, she was actually in the process of creating a new song right in front of me. This is the way of Ashughs highly inspired and motivated.

When I came back and started editing sometimes I would forget what I was doing and I would be drawn, taken away into their beautiful world.

How was the filming process?

I feel very comfortable filming in Armenia, if I had plans I am sure it would have messed up. Unexpectedly, I met some of the most unusual and interesting artists in Armenia. So much so that my dreams have come true, first I met Tovmas Poghosyan and the Sayat-Nova Minstrel Song Ensemble, then I was introduced to some of the greatest living Minstrels. Then I met more composers and performers, so the rest of the filming went equally well, now I am editing my second film on Armenian music, I just couldn?t help it I had to do it. When something so beautiful is in front of me I must capture it.

What inspired you to make the film?

The magical moment and Armenia. I find Armenia inspiring, the people and the land. I don?t go with a specific plan but I do have a general concept that drives me. I feel very confident that I will be surprised and inspired in Armenia and that is exactly what has happened to me every time. I do not try to intellectualize my process, for me cinema is a guttural experience. Just like in life, there is no linear logic in film, we only find that logic in retrospect. For me it is also important to be synchronized with the world around me, that is the connection between me with camera and what is around me, I guess that is the most challenging part of the day, to be one with I am about to do to capture the magical moment. But the toughest of all is to film live music, all these theories fall apart as soon as you turn the camera on. Dance with it!

Did you have any financing?

Right now, no. But so much has changed in the past month, that it is really amazing. I have at least two more documentaries that are already filmed and I am in post-production on another film on Armenian music before I start on part three of my Armenian Trilogy. So, sponsorship is critical.

I don?t actively look for sponsors because for me it is not cost effective, and never for financing, I am not Michael Moore. My time is better spent moving forward and producing rather than spending my non recoupable resources. I did that once and it cost me and my quality of life.

The fact is everybody knows where I am, I have two web sites and two on NFB, I have completed three Armenian documentaries and more coming plus over 250 TV shows, I am not going away, so potential sponsors can easily find me.

So far to my own detriment I have financed everything. For my recent trip, I had to purchase new High Definition camera and new post production equipment. So, even documentaries are not cheap. For example, the average production member costs $500 to $1000 a day. Then you have a producer and a director, none of these people want to volunteer. Had I pursued sponsors for my recent three month trip to Armenia, I would still be in the chase. Instead, I shot three films and completed one, and I have started post-production on the next. The two documentaries airing next week were financed by me.

The other important factor, in my case is: if someone should ask me where is your script? What are you planning to do? I would have to say “I don?t know maybe I?ll do something on music,” the potential sponsor will laugh, nevertheless I have been doing this for 30 years. By the way, I have done it the other way too?50 page proposals and fancy binding, or on my production for the NFB, I must have written a thousand pages. So if I have to sit and write what I don?t know, then I have to figure it out and make a plan, that sets me back at least three months of not moving forward toward a production I am driven to do. All these expenses you?ll never see again.

I am driven by passion but that does not mean I have to live in the slums.

But having said all this, I see new hope.

What are your future projects?

Please click here if you want to be a sponsor:
http://armenianminstrels.com/text/sponsorship.htm 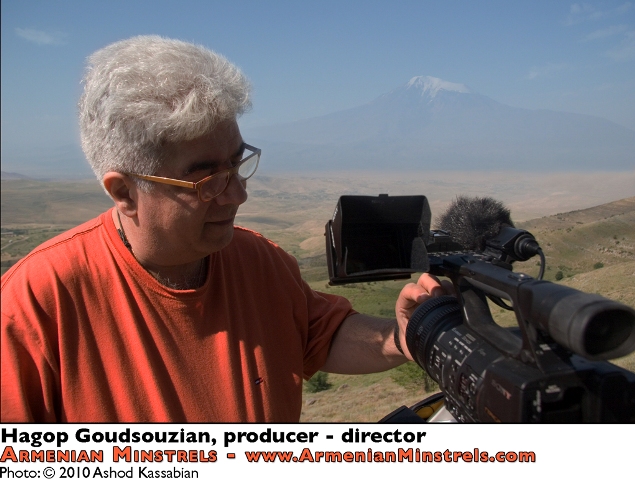