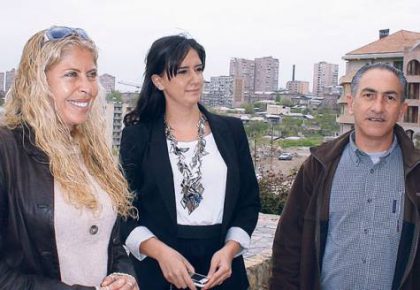 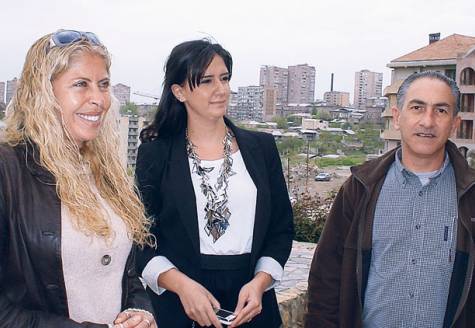 After being displaced for decades, many Armenians are eager to return to their country

This probably sounds like a fairy tale but it is not.

This is the real story of how three Armenian men, gathered for a press interview, found out that they were actually long-lost relatives who had been looking for each other for several years.

On a recent Saturday afternoon, 31-year-old Lebanese-Armenian Sarkis Valladian was waiting for me in the lobby of the Ani Plaza Hotel in Yerevan.

Before speaking with him, I was interviewing two Armenian-American brothers ? George and Khatching Titizian.

Valladian was within hearing distance and overheard the last part of my conversation with the two brothers. Shortly after the interview with the duo, I introduced myself to Valladian, who immediately, in return, asked to be excused for a few minutes and walked up to the Titizians.

“I was looking for them. I heard they come to Armenia frequently,” Valladian said of the Titizians, who travel from the United States to spend a couple of weeks in their homeland to follow up on their investments. It is a visit they have been making every year for nearly four years.

“When I heard them mentioning Kessab (Kasab) to you and their family business there, I realised that they were my relatives,” said Valladian. “Their mother and mine are first cousins. My grandfather used to go to the restaurant they own in Kessab.”

Kessab is a Syrian town located in the north-western Latakia governorate. Only 3 kilometres from the Turkish border, it is an ancient town dating back to the Armenian kingdom of Cilicia.

Today nearly 3,000 Armenians live in Kessab and the surrounding villages, the majority of them working in agriculture.

It is believed that nearly two-thirds of ethnic Armenians live outside their country today, a far-flung diaspora of a troubled people.

While the population of Armenia is estimated at 3.1 million, nearly 8 million more Armenians are believed to be living mainly in Russia, the US, France, Turkey, Lebanon and Syria.

There are also a smaller number of Armenians in Jordan and occupied Jerusalem.

In occupied Jerusalem, there is an Armenian Quarter in the old city, along with the Muslim, Christian and Jewish quarters.

Even Armenians living in the West follow developments in Arab countries closely.

It was to these Arab countries that thousands fled, following the massacre of their community.

Meanwhile, many Armenians in the diaspora started heading back to Armenia since the former Soviet republic got its independence in 1991. An increasing number of Armenians have returned in the past few years, with the aim of either settling down permanently or for investment.

According to some Armenians in Yerevan, nearly 20 families of Armenian origin have left the UAE in the past few years.

Business opportunities in the country are abundant, many Armenians say.

“It is a brand new developing country,” said Valladian, who moved to Yerevan nearly 14 months ago and opened a tavern in partnership with his brother and cousin.

“Such business doesn't need big capital and people meet each other in it,” he said.

The cost of establishing the business is estimated at $40,000 and it employs four people.

“For small and medium businesses, it is a prosperous country,” added the young Valladian who decided to settle in Yerevan with his brother and sister.

As he explained to Weekend Review, there were two main reasons for the decision. “First, it is nice to live in a place you can call home. And the second reason is we need to bring our knowledge and experience to Armenia,” added the young man who was born in Dubai to Lebanese-Armenian parents.

His retired petroleum engineer father had left Lebanon about 48 years ago to work in Kuwait, Syria and Saudi Arabia before moving to the UAE.

Valladian's decision to settle in Armenia was well thought-out. He travelled there 16 times between 2007 and 2009.

Now, he is there to stay and start a family. He is engaged to an Armenian-American photographer, who returned to Armenia nearly four years ago.

He is no different from many other young people.

“I visited the country nearly nine times [in the past few years] before I moved here,” said Jerai, a 28-year-old son of an Syrian Arab father and an Armenian mother.

“Since I was a child, I had a dream of having my own business, and I also dreamt of coming to Armenia,” explained Jerai, who is planning to open his own restaurant in early June. He moved to Armenia just a few weeks ago.

“Dreaming of coming here is not by itself enough. I need to have a job here and logic should be part of my thinking,” he added.

Jerai's restaurant will be offering both Arabic and Armenian food, such as chicken shawarma and falafel, because “there is a demand for this type of food here”.

Interestingly, when Armenians started arriving in many Middle Eastern countries nearly a century ago, they brought with them Armenian delicacies, such as paterma (dried spiced beef), sujouk (air dried sausage) and what many Arabs call “safeeha Armania” ? thin Armenian meat bread.

Today, Armenians are taking back some famous Arabic dishes to Yerevan.

Jerai is engaged to a young Lebanese-Armenian woman who was born in Canada. She has also moved to Yerevan and is now working in sales and marketing.

Many Armenians are adamant on getting Turkish recognition of and an apology for their claim that up to 1.5 million Armenians were killed between 1915 and 1918, believing it to be a “genocide” perpetrated by the Ottoman Turks.

But Turkey rejects the accusation, saying the number has been exaggerated and those who were killed died in the chaos of the First World War.

This disagreement has been one of the major obstacles in the path of normalisation of ties between the two neighbours.

Both Armenia and Turkey agreed late last year to establish diplomatic relations and re-open their borders, closed since 1993, when Armenia and Azerbaijan went to war over the enclave of Nagorno-Karabakh.

The signed protocols are supported by the Americans, Europeans and Russians. But they were not endorsed by either the Turkish or Armenian parliaments.

The Turkish-Armenian reconciliation process goes back to 2008 when Turkish President Abdullah Gul attended a soccer match in Yerevan at the invitation of Armenian President Serj Sargisian. This soccer diplomacy was opposed by people in both countries.

Recently, Yerevan announced the “temporary suspension” of the ratification of the peace accords, blaming Turkey for not fulfilling its commitment of endorsement ? a charge denied by Ankara. Turkey at the same time renewed its commitment to the rapprochement process. 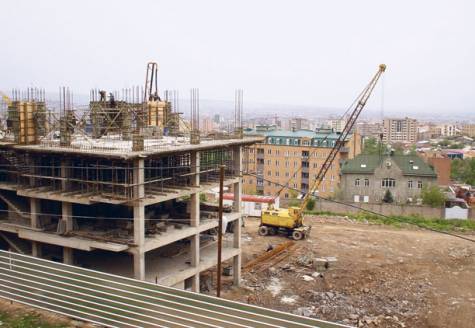 Both countries have accused each other of putting obstacles in the path of ratification of the protocols. The Armenian move was described by many analysts as a political tactic aimed at putting more pressure on Turkey, rather than Armenia, to endorse the peace protocols.

Many Armenians want their children and grandchildren to remain attached to their homeland. To encourage their children to visit their country of origin, both George, 66, and Khatching, 70, bought properties in Armenia.

When there is an investment, “they [the children] will have a reason to come back [to Armenia] and the choice is theirs”, George, a father of three children aged between 41 and 37 and a grandfather of 10 children, told Weekend Review.

None of his children has visited Armenia yet.

“Our children are born in North America,” said Khatching, who has three sons, one daughter and four grandchildren.

“Automatically, they are Americans. Their mentality is American and their livelihood as well [is in America]. To save the next generation we came back, because Armenia is our land. Now, they have a home to come back to and a land that belongs to them,” Khatching, a retired homes remodelling contractor and wall-to-wall carpets seller, said.

Large numbers of younger Armenians have already become part of their new country and established families and businesses.

Many Armenians acknowledge that starting from scratch in the old homeland could deter them from going there.

George and Khatching were born in Kessab. Their family then moved to Lebanon, where they attended a boarding school. In 1962, the two brothers moved to Canada, where they lived for 20 years, got married, raised families and established themselves as successful businessmen.

Later, they moved to Los Angeles. After Armenia's independence nearly two decades ago, the well-off brothers “always wanted to come but there was no reason [to]”, George, a retired building contractor, said.

He finally made the move and visited his ancestral homeland in 2006, but the elder brother had taken the initiative earlier and visited Armenia and Syria in 2001.

At the beginning, the brothers started a charitable project with the help of friends. They purchased land and built a hotel in the Nagorno-Karabakh region. The hotel consists of 14 rooms and employs 21 people.

After their first visit four years ago, George and his wife fell in love with Armenia and decided to buy land there. The following year, they returned.

But his Armenian-Canadian wife died before making her third visit, while George visited the country in late 2008 and again this year.

Later, the brothers bought, along with a third partner, 100 hectares of land in a region about 70 kilometres from the Turkish border. The plan is to “develop it for agricultural purposes, to generate work [for many people] and to create profit one day from the fruit trees, including apricot trees”.

The $250,000 (Dh917,500) investment in agricultural land was followed by the purchase of another piece of land measuring 3,000 square metres for the three partners to build homes on.

Asked whether any party is encouraging them to invest in Armenia, Khatching replied: “Investing here is coming purely from our hearts.”

Trips to reach back at roots

At present, many Armenians abroad believe they are facing what they call “white genocide”. This “white genocide” is the assimilation of the Armenian character with other identities as a result of living for a long time in societies abroad and among people of diverse cultures and backgrounds.

But many older Armenians are keen to preserve the Armenian identity in their younger generations.

Armenian-French banker Sarkis Bedoian, 66, has been arranging trips for ethnic Armenian-French school children to their ancestral homeland for three years. At the beginning of the project, it was an award for class toppers. But then he decided to include all students in the highest classes of the two Armenian schools in Paris (children aged 11 years in one school and 15 in the other). This year, he is travelling with 45 children.

“I want them to understand Armenia as a country and the Armenian culture,” Bedoian told ?Weekend Review'.

“Armenia is not only a language. It is also a state. And young people need to be proud of being of Armenian origin,” added Bedoian, who is married to a French woman. He was accompanied by two of his four daughters on the trip to Armenia. He said he was paying almost all the costs of the trip from his own pocket. This includes accommodation, meals and internal travel expenses. Parents of children are required to cover the costs of the air tickets only. Bedoian estimates the cost of this year's trip at between 20,000 and 25,000 euros.

But learning the language “is only half of the way. Children need to fortify their language by seeing their country. They need to understand there is something behind the language,” Bedoian said.

“Children are our future soldiers … our identity is very political,” he added. Bedoian's father was orphaned at the age of 5 in the First World War. And he was rescued by a French Catholic mission, which took him to Paris, the banker recalled.

Armenian expatriates who recently returned to their home country: Silvia (left) and Hrach Davidian (right), relocated from the UAE, while Anita left Canada to live in Armenia