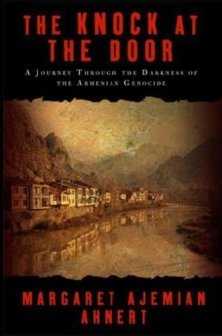 During a live telecast on Sunday, 24 June 2007, of ?This Week With Appo Jabarian? author of the well-received book ?The Knock at the Door,? Margaret Ajemian Ahnert, revealed that after the Genocide, the orphaned Armenian survivors, feeling helpless and lonely, used to tell one another ?mortseer? (?forget?) the past.

This well-read and respected Armenian American intellectual, versatile writer and journalist is the daughter of a survivor of the genocide.

Even though her orphaned surviving mother, Esther told her compatriots ?mortseer? in order to help alleviate the deep, unbearable pain of her co-survivors, she could not forget what Turkey had inflicted upon her and her family. She told her daughter Margaret all that she remembered. She talked movingly. Her tearful eyes said a lot more. They narrated that which words alone could not tell. And Margaret took notes.

Margaret spent many days of intimate, precious moments with her mother.

They were annihilated because they were ?faulted? for being the indigenous people of Armenia.

An entire homeland was confiscated.

So, how could one say ?mortseer,? questions Ajemian Ahnert.

My TV co-host, Los Angeles intellectual and avid connoisseur of books, attorney Arthur Minassian, asked Margaret whether the genocide had impacted her as well.

?Indeed!” she responded, adding that that the genocide not only had influenced her parent?s generation but also the generations that followed it.

She read this poignant passage from her new book The Knock At The Door: ?Once, a driver with an Armenian sounding name said he was Turkish. ?Are you Armenian? he asked. I hid my trembling hands in my pockets.

Beads of sweat broke out on my forehead and inched down my nose. I was afraid to tell him I was Armenian . . . Why did I deny my heritage? Why was I afraid of this Turkish cab driver??

She also writes: ?I remember one cold day in December, I returned home from elementary school to find my mother crying and swaying back and forth in the living room. Button was missing from her faded gray sweater.

A sad Armenian song played on the record player. She didn?t see or notice me at first, but when she did, she turned her head in my direction, put two fingers to her lips, and whispered, ?Shhhhhhh.? Then she turned her head away, stared blankly ahead and continued her chanting, ?there is no one left. They are all dead.?

That?s why Ajemian Ahnert encourages her readers to ?heeshel? the genocide. And what does she get for remembering the first systematic, premeditated murder of the Armenian nation at the hands of Turkey? She herself gets a brutal ?knock? at the door! Three weeks ago, several denialist Turks disrupted her book reading at a Barnes and Noble bookstore in New York City?s Upper East Side. In the middle of the reading by the author and in the presence of many distinguished guests, the denialists stood up and hurled accusations at the author for ?lying.? They started passing out denialist propaganda. One of the Turks got arrested by fast-responding New York police.

Apparently the denialists are far more troubled by her book than the surviving victims and their descendants.
The book gets the reader involved very keenly with each and every emerging event as experienced by Esther and many others during the genocide.

Ironically, the book and the disruption of its reading puts a face on one more victim: the author. The disruption engenders yet one more terrifying event that is experienced, this time, by a descendant.

This new book is written with ?lan and elegance.

It tells the story of human wit, and vintage survival.

It brings to the forefront the interesting twists and turns of a long and arduous road from the Turkish blood baths in Western Armenia to the hospitable shores of America.

It?s more than ?The Knock At The Door!?

This book will fulfill any reader who is looking for a living testimony to the willpower of a nation, the Armenians, who overcame seemingly insurmountable obstacles in life and rose again to remember. . .

This work of art reminds us that it?s good to also ?heeshel,? that the Armenians are no longer known as ?the Starving Armenians,? and that they have come of age.

Grab this book and read it. It is available at Armenian bookstores, Barnes and Noble, Borders Bookstores and Amazon on the internet.

Note: Appo Jabarian is the Executive Publisher and Managing Editor of the USA Armenian Life Magazine.

History made real
By  Lucinda Morgenthau, New York, critic
18 May 2007

This is one of those rare books of historical exegesis that so draws you in, it is almost impossible to put down. Margaret Ahnert opens up a neglected moment in history, one that has haunted her family since she was born. For near a century the Armenian genocide in Turkey has been told through dry statistics and to my knowledge this is the first book that emboldens the atrocities by using the vehicle of a single victim, the author's mother, who tells her the story of what happened to her in Turkey when she was 15 years old. And do we get drawn into the life of this whip of a child as she endures a death march through Turkey. While older people perish early on, Ester slips out of carts full of doomed people, gives herself to lusty Turks who abuse and rape her, and performs slave labor of all kinds in return for a stay of execution. In fact, she does anything in order to survive. Ester's story is retold by her daughter with lyricism and irony. Her eye is a camera, unrolling every quirky detail rather than slipping into maudlin generalizations.

Ahnert is bound to become the center of heated controversy:the Turks rabidly deny that they engaged in ethnic cleansing of their Armenian population and have been known to step up to fight anyone who says differently. Until now, we have had little reason to disagree with them; after all you have to see, hear, experience a phenomenon before it takes on the color of reality. Margaret Ahnert has done that — and in the process, validated the chronicle of Armenian history. This is a beautiful and engrossing book.