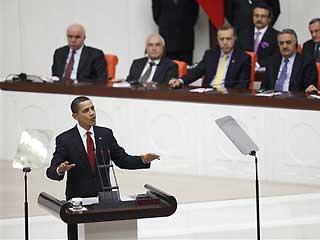 As such, our expectations should be grounded on that which is possible. Our expectations of President Obama for his recognition of the Armenian Genocide fall within that realm of possibilities.

There are many factors in support of this claim. It's true we can conjure up the absence of the use of the word ?genocide? during the President's recent visit to Turkey as a negation of that possibility. It is also true that, while in Turkey, the President missed an excellent opportunity to fulfill his pledge for recognition.

We may lament the loss of this opportunity, yet at the same time we have to ask ourselves about the realism of our expectation of its happening on Turkish soil.

But when we place the form and substance of Obama's Turkish visit in its true context, we will be able to assess the unprecedented achievement that the President's bold conduct provided to the Armenian Cause.

Simply put, while in Turkey President Obama's expressed statements and maintained position elevated the Armenian Genocide recognition issue to a political level as opposed to Turkish efforts of confining it to the historical context.

The fact of the matter is that on two official occasions, the President, with his distinctive style, referred to the Armenian Genocide in political terms.

At a press conference in the Cankaya palace, President Obama, with Turkish President Abdullah Gul at his side, in a marked and perhaps even prearranged manner, fielded the first question in the press conference to Christy Parsons, a reporter from his hometown newspaper, ?The Chicago Tribune.? And the question was about Obama's acknowledgment of the Armenian Genocide and whether he has now changed his position on the issue.

The President answered unwaveringly, ?Well, my views are on the record and I have not changed views.?

Let's look at the portents of this statement–in Turkey itself, at the presidential palace and in the presence of the Turkish president–the American President confirmed that what happened against the Armenian people is genocide.

The President was just as bold in his speech to the Turkish parliament. In his message to Turkey's parliamentarians and members of government, the first political issue that Obama raised was about the historical past (that is, the Armenian Genocide) and the normalization of Turkey-Armenia relations. In the written text of the speech, four paragraphs are devoted to this issue compared to the three paragraphs for the next Israel-Palestine issue.

The President's message was very clear. He said: ?History, unresolved, can be a heavy weight. Each country must work through its past. And reckoning with the past can help us seize a better future. I know there are strong views in this chamber about the terrible events of 1915. While there has been a good deal of commentary about my views, this is really about how the Turkish and Armenian people deal with the past. And the best way forward for the Turkish and Armenian people is a process that works through the past in a way that is honest, open and constructive.?

Thus, inside the Turkish National Assembly a ?foreigner? for the first time confirms the ?terrible events of 1915? and urges the Turkish people and its leaders to overcome the past through ?honest, open and constructive? ways. In doing so, President Obama impressed that this is not about his and U.S. position regarding the fact of the Armenian Genocide, rather this is about the attitude of Turkey and its people in overcoming that issue.

Naturally, despite all this, it is our expectation that President Obama issue in the coming days his presidential statement acknowledging the Armenian Genocide. So far, we do not detect any signs negating our expectation. On the contrary, all factors indicate that on this issue the final word lies in the White House.

For instance, in spite of heavy pressures from influential pro-Turkish American circles, the Departments of State and Defense–in contrast to their blatant opposition in the near past–now do not dare express their opposition to the process of genocide recognition. Both Departments, when asked to comment on the issue, suffice by pointing that this issue lies within the jurisdiction of the White House.

And the White House so far is signaling that the President has not changed his position.

Editor's Note: Seto Boyadjian, is an attorney and member of the National Board of the Armenian National Committee.