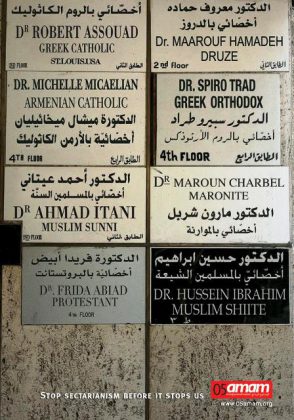 —  The classified ads appeal for fresh Shiite faces at a modeling agency. The parking lots are marked “For Maronites only.” And a sign at doctor's office reads: “Muslim Sunni.”

None of it is real, but part of a provocative advertising campaign which aims to take its warning against sectarianism to the airwaves with a series of television commercials in the coming weeks.

The campaign was conceived by children of 's 1975-1990 civil war, who are now young professionals mainly in their 30s alarmed by the way society continues to isolate people of different backgrounds and beliefs.

“ is quite tribal,” said Asma Andraos, 35, one of the founders of the civic group 05Amam, adding that people can be “blunt” when it comes to religion and politics. “Very often you'll get into a taxi, and the driver will ask your name, then where you are from, and then more questions.

“What he is trying to find out is what religion you are – a) if you're Christian or Muslim and b) if you're Orthodox, Maronite, Sunni or Shia,” she said. “We are trying to say we have a problem. What we want to do is raise a debate.”

The ads have shocked since they began appearing in eight major newspapers last month and on hundreds of billboards across the country. “Get the latest hairstyle from a qualified Armenian Orthodox coiffeur,” and “Real estate for rent: Greek Catholic owners and neighbors,” reads a panel of classified ads, distinguished only as a public service announcement by small print below: “Stop sectarianism before it stops us.”

Billboards depicting license plates with a letter “S” for “Shiite” and physician offices that show not the type of practice but instead the doctor's religion have even been attacked by people who believe they are real.

“Of the 300 billboards we had, about 50 of them have been pulled down or destroyed,” said Edmund Rabbath, 36, another founder of the group. “But it's good. We're happy about that because it means we have reached our aim. We want reactions, positive and negative,” said Rabbath.

Rabbath is among some 20 people who formed 05Amam after being on the frontlines of mass demonstrations last year which forced the withdrawal of longtime powerbroker and the subsequent election of an anti-Syrian majority parliament.

United in grief and anger after the February 14, 2005 assassination of five-time prime minister Rafiq Hariri, they camped out by the thousand on the government's doorstep in their call for a new leadership under the rallying cry of “Syria, out.”

Their demonstrations were dubbed “The Cedar Revolution” by the US State Department, after the tree on the Lebanese flag which protestors waved incessantly on Martyrs' Square in downtown .

Afterward, a core group formed 05Amam, which takes its name from the year, 2005, and the Arabic “Al Mujtamah Al Madani” which means “civil society,” and when condensed to “Amam” means “forward.”

“Our requests last year were national requests,” recalled Rabbath. “We were asking for the withdrawal of and an international tribunal into the Hariri killing.”

By pure coincidence, the 05Amam group launched its advertising campaign November 12, the same day that five pro-Syrian ministers, including two from Shiite militant group Hezbollah, resigned from the cabinet after being included by Western-backed Prime Minister Fuad Siniora last year.

For the past two weeks, thousands of opposition protesters led by Hezbollah and Christian followers of longtime exile and general Michel Aoun have been camping on those same grounds. They are demanding a greater say in the government, the resignation of Siniora, and are threatening to form their own interim government unless they gain a one-third blocking share of the cabinet.

The protests have sparked deep dismay among those who took part in last year's demonstrations, because they believe and are mobilizing Hezbollah supporters to block the formation of a Hariri tribunal, which could see Syrian suspects tried.

“Personally speaking, they have the right to ask for whatever they want,” said Rabbath. “But now I think their orders are not Lebanese in origin, and the people camping out are doing so on the order of their parties.”

Andraos, who said that among the diverse members of 05Amam is a Christian who supports Hezbollah, said the campaign did not intend to launch at such a volatile time, but “it just makes it clearer how dangerous things can get.”

Sectarianism “is what drove to civil war,” said Andraos. “And it's possibly how today's opposition, which was initially a political thing, is now turning into a confessional thing.”

The group has received hundreds of emails, some from people who are panicked but most from people who applaud the tongue-in-cheek message. “It is important to raise awareness about this issue,” wrote one man who described himself as a Jew of Lebanese origin. “Because is the home of all Lebanese whether they be Christians, Muslims or Jews.”

The group is working to finalize a series of 15-second television ads that it hopes will start running later this month or early next year. Already, one channel has expressed interest in running the ads for free, though organizers declined to say which one for fear that other channels may be unfairly deterred.

“It is as if the civil war never happened. None of us have learned any lessons,” Rabbath said.