Our old ally's bent on self-destruction

It's hard to watch an old pal hit the skids, making one disastrous decision after another, throwing away a brilliant future. That's the position we're in with Turkey – a former ally bent on self-destruction.

A NATO member ideally positioned to serve as a bridge between the West and the Middle East, Turkey's secular constitution and economic progress should have made it an example for other regional states to emulate. Instead, Turkey has been aping the blighted regimes of the Arab world:

– On the eve of Operation Iraqi Freedom, Turkey stabbed the United States – its only dependable ally – in the back, denying passage to our troops in the fateful illusion that Ankara could save Saddam.

– Turkey strangled its (always faint) chance of membership in the European Union with internal repression, ludicrous prosecutions, farcical legislative efforts to Talibanize society and its stubborn denial of the Armenian genocide.

– Impatient to send Turkish troops into Iraq to attack the PKK (a radical Kurdish group with a terrorist past), Ankara might face a startling military embarrassment, further alienate Washington – and finish off its last prayer of EU membership. (The Europeans just want excuses to keep Turkey out – and Turkey has a genius for providing them.)

– Despite the potential for a mutually beneficial relationship with Iraqi Kurdistan – where Turkish businessmen make substantial profits – the Ankara government obsesses about preventing the emergence of a Kurdish state. Betting on Iraq's Sunni Arabs (who despise the Turks but use them), Turkey has set itself up to lose big if Iraq dissolves.

– With its mischief-making in Iraq, cloak-and-dagger monkey business with Syria and failure to appreciate Iranian deviousness, Turkish foreign policy is in a self-destructive shambles unrivaled since the foundation of the modern Turkish state. 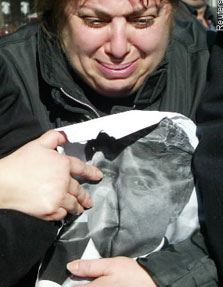 All of this leaves me in sorrow, since I spent decades arguing that Turkey's strategic importance required us to be patient as this land of enormous potential found its way to the future.

For an enthusiastic visitor to Turkey for three decades, it's been heartbreaking to watch its society and economy come to life – only to fall prey to Islamist vampires.

With Salafism – the Saudi brand of radical Islam – biting into the Turkish political jugular, the joke is that the despised Bedouins of Arabia have finally conquered the “Ottoman Empire.” The most primitive and backward form of Islam is increasingly at home in the heartlands that had formed the core of the most powerful Muslim state for five centuries.

Now the question isn't whether our old ally can overcome its internal difficulties, but which of its troubles will overwhelm it first. Will the Islamist destruction of Turkish culture continue, or will a rumored military coup plunge the country back into another period of internal violence and political stasis?

For Washington, it's all bad news. The march of punitive Islam (punitive, above all, to Muslims) continues to feed on wild-eyed anti-Americanism – but a military coup could lead to a misadventure in northern Iraq similar to Argentina's Falklands debacle.

Last week's murder of the Turkish-Armenian journalist Hrant Dink (in which Islamo-nationalists cynically employed a 17-year-old assassin who could only be charged as a juvenile) laid bare the divide in Turkish society: 100,000 Turks turned out to protest the barbarous killing, but the government barely shrugged, since the demagogues now command far greater numbers.

Turkey's educated elite is in much the same position as Germany's elite during Hitler's rise to power. Imagining that the Islamists would sputter out, progressive Turks failed to act. Now Turkish civilization – so great for so many centuries – is unraveling the way Germany's did in the 1930s. Turkish intellectuals made the classic error of underestimating the common man's capacity for hatred and lust for blind revenge.

As for the spectacularly virulent and dishonest anti-Americanism in the Turkish media – we need never have a “Who lost Turkey?” debate: The Turks lost it for themselves. Instead of maturing into the Western culture of responsibility, Turks succumbed to the Arab world's culture of blame.

Having looked down on Arabs for centuries, Turks are now becoming functional Arabs, reclining into fantasies of greatness as surreal as a Sufi mystic's hashish dreams. Ataturk's revolutionary vision for a modern Turkish state – betrayed by his own corrupt successors – is fading into the reality of yet another retarded Muslim satrapy.

An even more accurate parallel case than 1930s Germany is today's Pakistan. Turkey is on the way to becoming another extremist-poisoned garrison state held together solely by its military.

On my last visit, I got a madman's lecture from a Turkish customs officer on the resurrection of the Ottoman Empire. But instead of returning to that empire's undeniable glories, 21st- century Turkey appears determined to replay the miserable Ottoman twilight.

I wish we could save Turkey. But we can't. That's up to the Turks.

Photo: A woman weeps over a photo of slain Turkish-Armenian editor Hrant Dink.