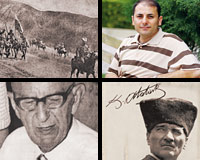 By HAŞİM S?YLEMEZ and SEDAT G?LMEZ
Newly revealed documents prove that there were patriotic Armenian-Turkish citizens during the War of Independence who risked a backlash from their community.

Prominent examples of this are Muslim Armenians Hasan and Necati, two members of the Mim-Mim Group, which shipped arms to Anatolia from Istanbul; naval soldier Pandikyan, an operative in the British intelligence service who leaked classified information to Turks about security controls; and singer Madam Blanş, who collected money for the Red Crescent after performances. New findings revealed by the four-year study of Dr. Cafer Ulu opens a different and solemn window to the Armenian problem. Ulu reveals that Armenians played a significant role in giving the surname “Ataturk” to Mustafa Kemal, penning a signature for him.

At a time when Anatolia was engulfed in its battle for independence, a delegation from the Black Sea region met with Armenian David Sahakkulu, who was working as a translator for a group monitoring the straits set up by the occupying Allied Forces, and asked for help with an arms shipment. He was asked to inform Turks of the Allied forces' guard hours and numbers in order to safely ship Turkish arms from Istanbul to Trabzon. He was even offered money. He agreed to help but rejected the money, saying he owed what he possessed to Turkey and its schools. However, many other Armenians, particularly Armenian Patriarch Zaven Efendi, were acting against the Anatolian liberation movement at that time.
Sahakkulu is one of the Armenians who helped the self-proclaimed Turkish government during the War of Independence between 1919-1922. The efforts of Sahakkulu and other Armenians are important at a time when debates over Turkish-Armenian relations are reduced to the forced migration of Armenians in 1915, Armenian massacres and the so-called genocide, although they have a 400-year history. Even so, documents about such people and their activities have not been disclosed until recently.

Armenian singer took stage with the Turkish flag
Newly revealed documents prove that there were patriotic Armenian-Turkish citizens during the War of Independence who risked a backlash from their community. Prominent examples of this are Muslim Armenians Hasan and Necati, two members of the Mim-Mim Group, which shipped arms to Anatolia from Istanbul; naval soldier Pandikyan, an operative in the British intelligence service who leaked classified information to Turks about security controls; and singer Madam Blanş, who collected money for the Red Crescent after performances.

New findings revealed by the four-year study of Dr. Cafer Ulu, a historian from Fatih University in İstanbul, opens a different and solemn window to the Armenian problem. Ulu's findings suggest debating the issue separately from the 1915 forced migration act. He also reveals that Armenians played a significant role in giving the surname ?Ataturk? to Mustafa Kemal, penning a signature for him, and had significant involvement in linguistic studies during initial years of the Turkish Republic.

Madam Blanş, an Armenian-Turkish singer in the early 1920s, was known for collecting money for soldiers at the front following every concert she performed. She would take to the stage with Turkish flags. The Red Crescent volunteers, which included Greek, Armenian and Jewish girls, would collect donations, and people who had no money would donate their jewels.

There were many non-Muslims in the Karakol Cemiyeti and Mim-Mim Groups, two organization that shipped arms into Anatolia during the War of Independence. H?samettin Ert?rk, a leading figure in the War of Independence, described the activities of Hasan and Necati: ?There were non-Muslim supporters of our cause who worked for us in the offices of the Allied countries in Istanbul. They were working for the lands they lived on despite the difference of religion. Necati, who was working for the British intelligence service, was one of these people. He spied on the British for us.?

Another patriotic Armenian was Pandikyan, who was rewarded for his work by then-Defense Minister Marshal Fevzi ?akmak. Panidkyan was the head of the Galata Intelligence Service, which was affiliated with the British intelligence service, and he leaked a great deal of information to the Turks. He contributed to releasing people detained for supporting the Anatolian liberation movement, informing those who were certain to be captured, returning or destroying classified documents seized by British authorities that could be used against the movement and smuggling ammunition and other military equipment.

Ulu noted that this was the first time such information was made public. ?The Armenian problem has so far been restricted to events in 1915. There are certainly events and players beyond those events. In this regard, it is not appropriate to ignore or reject contributions of Armenian-Turkish citizens during the War of Independence and after the establishment of the republic,? he said.

Armenian-Turks suggested ?Ataturk? surname for Mustafa Kemal
Agop Martayan Dila?ar was enlisted in the Ottoman army at the age of 19 when the World War I broke out. He first served on the Caucasus front and later on the Damascus front when the forced migration act was approved. He met Mustafa Kemal in Damascus. They established good relations in the following years, and Dila?ar was appointed chief expert at the Turkish Language Association (TDK) during the Second Turkish Language Assembly held in August 1934. Ataturk appreciated his contribution and gave him the surname Dila?ar in 1935.

The Armenian Church in Istanbul published an almanac titled ?Turkish Armenians in the 75th Year of the Republic.? It is stated in the almanac that Dila?ar suggested the surname Ataturk during a meeting of the TDK and that it was accepted. This point is agreed on by the majority of Armenians even though it was not revealed until recently but only voiced by Armenians. Turkey's second president, İsmet İn?n?, and 22 lawmakers presented a bill to the Turkish Parliament on Nov. 24, 1934 granting the surname Ataturk to Mustafa Kemal. According to Ulu, it was Armenians who penned Ataturk's signature. He said: ?There is no strong objection at this point. This topic was brought up by Armenians in the past but was not explored by our researchers and historians. Moreover, there is no point in wailing over an Armenian citizen's having suggested it.?

Kasım G?lek and Ecevit's teacher was Armenian
When Mustafa Kemal expressed his wish to use Latin characters in his signature, Hagop Vahram ?er?iyan, then-calligraphy teacher at Roberts College, was asked to draw a signature. He prepared five different signatures and sent them to Mustafa Kemal. Three days later, Mustafa Kemal conveyed his thanks to ?er?iyan with a letter saying he had chosen one of them.

?er?iyan was famed not only for designing Mustafa Kemal's signature but also for teaching leading Turkish politicians. B?lent Ecevit, Kasım G?lek, Selim Sarper, ?mer Celal and Beh?et Ağaoğlu were all instructed by ?er?iyan during his 50-year teaching career.

A decade after the establishment of the republic, there were still opponents of Mustafa Kemal's reforms. On Oct. 21, 1935, Mustafa Kemal's radical opponents were mobilized to assassinate him. The plot, which was claimed to have been led by ?erkez Ethem, was foiled. After the foiled plot was made public, protests were held nationwide. There were Armenian-Turkish citizens among the protestors because the target of the assassination attempt was the president of their country.

Ulu noted that research on this issue would deepen due to the newly disclosed documents: ?The documents we used during our studies prove that Turkish-Armenian relations have a deep-rooted background and show that the two societies could not be easily separated from each other. What should be done for the future is that both sides should express only the facts, leaving aside prejudices and fears.?