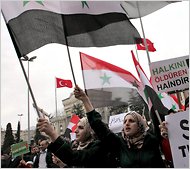 BEIRUT, Lebanon ? Turkey faces a growing challenge from the tumult sweeping the Arab world to its booming economic stake in the region, newfound political influence and longstanding policy of permitting no problems to fester along its borders.

In a few short years, Turkey has emerged as the Middle East?s most dynamic power. But weeks of Turkish diplomacy in Libya collapsed Monday, and Turkey?s prime minister bluntly called for Col. Muammar el-Qaddafi to step down. A similar situation may await in Syria, where President Bashar al-Assad has personally promised Turkish leaders to undertake reform while persisting with his crackdown.

In neighboring Iraq, Turkey fears the inability of the government there to keep the country stable as the United States completes its military withdrawal. And Lebanon, where Turkey enjoys access to both Hezbollah and its foes, is now entering a fourth month without a government.

Before the so-called Arab Spring unleashed by revolution in Egypt and Tunisia, Turkey was a catalyst in an emerging realignment of the Middle East, charting a foreign policy often independent of the United States in a region bereft of any country that matched its political stature. Now the unrest on its borders is undermining years of diplomatic and economic investment, forcing Turkey to take a more assertive role as its vision of economic integration runs up against the threat of growing instability.

?In the face of this unpredictable change around the Arab world, Turkish foreign policy is facing a major setback,? said Sami Kohen, a columnist for Milliyet, a daily newspaper in Turkey. Prime Minister Recep Tayyip Erdogan ?has started losing the leaderships in the Arab world that he trusted and considered important, one after the other.?

Syria, beset by a six-week uprising, may prove his greatest challenge, as it broadly echoes the experience of its Arab neighbors over the past four months. In Tunisia, Egypt and now Libya and Yemen, governments have resisted surrendering some power to stay in office, only to eventually face the prospect of losing all power. Syria?s leader, too, is rebuffing calls for change.

?Outside actors possess little leverage,? the International Crisis Group said Tuesday in a statement on Syria. ?Even countries that have developed close ties to Damascus, such as Turkey, are viewed with growing suspicion by officials who are increasingly paranoid and consider anything short of outright support an act of betrayal.?

In past weeks, Turkish diplomacy has been especially intense with Syria, which it considers its most immediate concern as a linchpin in its regional strategy of greater economic integration. Mr. Assad and Mr. Erdogan have spoken on the phone at least three times, and the Turkish intelligence chief, an official with deep knowledge of Syrian affairs, has visited Damascus twice since the uprising began in March. Their message, officials say, was that time was running out for reform.

In language that echoed Mr. Erdogan?s statement to Colonel Qaddafi, he warned Syria?s government against a repetition of Hama, where the Syrian military crushed an Islamist revolt in 1982, killing at least 10,000 people and perhaps far more.

?Turkey needs Syria more than it needs the Syrian regime,? said a Damascus-based analyst who requested anonymity, given the delicacy of the subject.

From Iraq to North Africa, Turkey?s growing profile in the Arab world has emerged as one of the region?s most remarkable dynamics. Trade with Iraq was about $6 billion in 2010, almost double what it was in 2008. There, and in Syria, visa restrictions were removed, facilitating trade across booming border regions that helped reconnect cities like Aleppo, Syria, to their historic hinterlands. About 25,000 Turkish workers flocked to Libya for sprawling construction jobs. Turkish pop culture is everywhere: the star of one action series, ?Valley of the Wolves,? is so famous that he lends his name to Iraqi cafes.

Since January, Turkey has sought to protect those gains, while negotiating the tumult in the region. Though Turkey?s ties with Egypt lacked the depth of those with other Arab countries, Mr. Erdogan called on President Hosni Mubarak to step down while an American envoy was still insisting that Mr. Mubarak be allowed to serve out his term.

But Turkey has suffered setbacks elsewhere. In Iraq, a coalition it helped create ? Iraqiya, led by Ayad Allawi ? lost to the coalition led by Prime Minister Nuri Kamal al-Maliki, despite winning the single largest bloc of Parliament seats in March 2010 elections. (Mr. Allawi himself was almost completely marginalized in the negotiations that ensued.) There remains skepticism in Turkey over Mr. Maliki?s ability to hold the country together and defuse sectarian tensions after the American military withdraws by a deadline of year?s end.

Turkish diplomats sought to reach a negotiated solution in Libya, but complain that Libyan officials lied to them about their willingness to impose a cease-fire. Turkish officials said they would court the Libyan opposition more aggressively and publicly in coming weeks.

They have stopped short of that call in Syria, with which Turkey almost went to war in 1998 over Syrian support for Kurdish guerrillas. Since then, Turkey has promoted its relationship with Syria as a model for its ties with other Arab countries. The two have held joint cabinet meetings and even military exercises. Trade has tripled in three years, and Mr. Assad and Mr. Erdogan are said to be fond of each other.

?The two countries have intimate relations, and Turkey is immersed in the Syrian political game,? said Burhan Ghalioun, director of the Center for Contemporary Oriental Studies at the Sorbonne in Paris. But, he added: ?Turkey is warning Syria. Turkey is saying that it has strategic interests in Syria, and it cannot afford to let Syria explode.?

Turkey has sought to hedge its bets, hosting leaders of the Syrian Muslim Brotherhood and allowing a meeting of the opposition in Istanbul. That has angered Syrian officials, who insist that the uprising is being plotted abroad. In a possible sign of tension, a Turkish Foreign Ministry official said no more delegations were planned to Damascus.

?The Syrian government is furious at Turkish officials whom they considered friends only yesterday,? said a Syrian analyst in Damascus who asked not to be named.

So far, Turkish officials have pushed Syria for far broader reforms, including an attempt at national reconciliation and dialogue that would ostensibly bring in the banned Brotherhood. Officials say there is a sense in Ankara that Mr. Assad wants reform but is stymied by more obstinate forces in the ruling elite, a point echoed by Mr. Erdogan.

?He says, ?I will do it,? ? he said in a television interview. ?But I am having a hard time understanding if he is being prevented from doing it or if he is hesitating.?

Reporting was contributed by Sebnem Arsu from Istanbul, Hwaida Saad and Nada Bakri from Beirut, and an employee of The New York Times from Damascus, Syria.