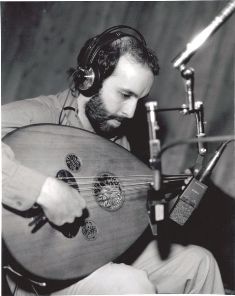 Ara Dinkjian is best known as the founder of the highly influential and groundbreaking instrumental group, NIGHT ARK, which recorded four CDs for RCA/BMG and PolyGram/Universal. His compositions have been recorded in thirteen different languages by top singers and musicians throughout the world (including Eleftheria Arvanitaki and Sezen Aksu), proving that music is indeed the international language. His hit “Homecoming” (“Dinata Dinata”) was performed at the closing ceremonies of the 2004 Athens Olympics. Ara Dinkjian is also considered one of the top oud players in the world. He was chosen to represent the Armenians in the international oud festivals of Jerusalem and Thessaloniki. One of the most striking features of Dinkjian's oud style is his uniquely beautiful tone.

“An Armenian In America” is Dinkjian's first solo CD. It was recorded live at the 2005 International Oud Festival in Jerusalem. The program showcases his oud playing and timeless compositions. He is accompanied by the world-class musicians Zohar Fresco on percussion and Adi Rennert on keyboards. Beyond category, Dinkjian continues to create his own unique musical landscape.

Dinata Dinata: is a song on the “Meno Ektos” album (1991) (”I'll keep outside”), composed by Ara Dinkjian and interpreted by Eleftheria Arvanitaki. It mixes the influence of Balkan music with electronics. That song, among the others on “Meno Ektos,” made Arvanitaki a famous singer out of Greece.