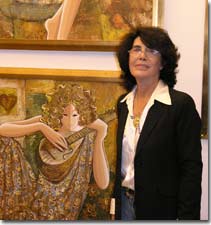 Born in Beirut in 1946, and still living in the city today, Hrair studied at the Lebanese Academy of Fine Arts.

Known for his Byzantine-inspired paintings and his religious-inspired iconography, Hrair first gained success in the '60s and '70s.

In addition to achieving success in his home country, the painter is also known in Europe, the U.S and in the Arab world. Over the years, Jacqueline Kennedy Onassis, Anthony Quinn, and Liza Minelli each acquired Hrairs of their own.

His paintings are usually warm-colored - reds, oranges and yellows are common - and plunge their viewers into a psychedelic, almost spiritual, world. What might amaze viewers is the way Hrair combines different themes and styles together on one canvas. His women (men don't tend to appear) have an imperial look - clad in puffy sleeves, jewels, and headdresses - and are often painted with horses, bright swirls of color, and what appear to be suns.