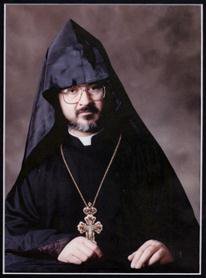 Bishop Shahe Panossian is Catholicosal Vicar of Kuwait and Arabian Gulf countries based in Kuwait.

He was delegated to Kuwait in 2011 after the retiring of Archbishop Goriun Babian, who was serving the Prelacy since 2001.

Bishop Shahe Panossian is born in 1958 in Kessab, Syria. He is an active member of the Cilician Brotherhood.

During the last 30 years he has occupied several important administrative and spiritual posts in the Catholicosate of Cilicia, the Birds' Nest orphanage and in the dioceses of Greece, the United States of America and Canada.

In 2006 he was appointed Dean of the Theological Seminary in Bikfaya, Lebanon and devoted himself to the difficult task of educating new generations.

On 20th April 2008 he was ordained as Bishop by Catholicos Aram I.