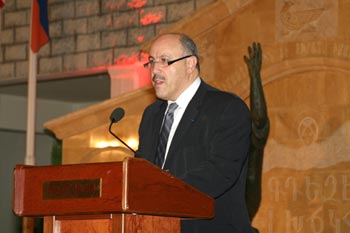 Nerguizian was born on the 13th of December 1953. He received his education at College Notre Dame de Jamhour des Peres Jesuites in Lebanon. In 1976 Mr Nerguizian graduated from Univeristé St. Joseph – Lebanon (University of Lyon Lumi?re- France) in Economics.

His Academic Background contributed to Nerguizian' s professional life where he started his career in 1972 with Bank G. Trad- Credit Lyonnais Beirut, followed by a move to Bank of Sharjah in the UAE in 1977, an affiliate of Banque Paribas. A Member of Banque Paribas (BNP Paribas) international Staff, Nerguizian was appointed as General Manager of Bank of Sharjah on January 1 1992.

To date, Nerguizian is still leading Bank of Sharjah and was instrumental in the growth of the Bank, its success and its promotion not only in the UAE but in the Region. His leadership of the team that acquired the operations of BNPI in Lebanon through a Lebanese Subsidiary, Emirates Lebanon Bank s.a.l. was instrumental. Nerguizian was appointed as Chairman-General Manager of Emirates Lebanon Bank s.a.l. Nerguizian' s footprint reached other industries as well; mainly the Oil and Gas, Steel, Insurance and Education. He is a director of Dana Gas Sharjah and currently Chairman of its Audit and Compliance Committee. He is also a Director of some of the Bank's Subsidiaries.

Nerguizian after serving as member of the board of trustees of Lycée Georges Pompidou in Sharjah for 12 years of which four years as Chairman, led in 2003 a team that established the Lebanese Educational Fund SA and the Lycée Libanais Francophone Privé in Dubai, a nonprofit private school that serves the educational needs of the Lebanese and Francophone Communities in Dubai and the Northern Emirates, where he acts as a Chairman. LLFP has entered into academic cooperation agreement with College Notre Dame de Jamhour in 2009.

In 2010 Nerguizian was discerned the Insignia of the Knight of the Order of Saint Gregory the Illuminator from the Armenian Catholic Church for his contributions to the community in Lebanon.

He is member of the Board of Governors of the Pearl Initiative
http://www.pearlinitiative.org/