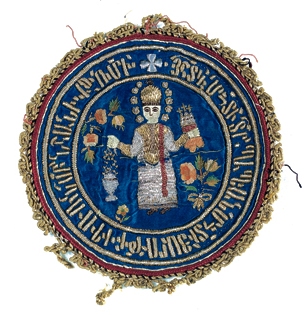 ISTANBUL ? It began with a question 13 years ago from the owner of a shop in the Grand Bazaar. The answer has led two American researchers to conduct the first detailed study of rarely seen sacred treasures belonging to the Armenian Patriarchate of Istanbul and to the creation of an underground museum to house the priceless artifacts.

In their 397-page book, ?Splendor & Pageantry: Textile Treasures from the Orthodox Churches of Istanbul,? Ronald T. Marchese, Marlene R. Breu and the Armenian Patriarchate expand what little was known about the unheralded role of women in the church and colorfully record the skills of women artisans who stitched their devotion onto luscious silks and velvets.

The museum itself houses such textiles as well as paintings and objects of precious metals from Armenian churches throughout Turkey which can be viewed, by appointment only, in the basement museum of the patriarchate in the humble Kumkapi neighborhood of Istanbul. The museum, created with donations from local Armenians and the European Capital of Culture 2010 organization, sits atop centuries-old ruins, discovered during renovations after the 1999 earthquake, that have since become a chapel.

Mr. Marchese, a professor of ancient history and archaeology at the University of Minnesota at Duluth, was conducting other research in Turkey in 1998 ?when a good Armenian friend that I have known for over 25 years, Mr. Murat Bilir, approached me one day to ask if I would be interested in examining religious textiles at a church in the old Armenian quarter.

?Mr. Bilir knew Payel Gulludere, the then-chairman of the board of directors of the church, who wanted to know what was in the storage depot and who made them,? he said.

?The first piece I examined,? Mr. Marchese said during an interview by e-mail, ?was a brilliant blue silk cloth, embroidered with an image of Mary and the Christ Child.? Impressed by the objects? workmanship, iconography and the dedication inscriptions, which helped to date the textiles, Mr. Marchese contacted Ms. Breu, who examined the objects the following year.

Then, with the blessing of Patriarch Mesrob II, the researchers began to ?record the brilliance of the material and put a ?face? on the unknown artisans who created a phenomenal body of material culture, from the monumental to the miniature,? Mr. Marchese said.

Ms. Breu, retired professor of textile studies at Western Michigan University in Kalamazoo, said during an e-mail interview that ?what we didn?t know at the outset was the great depth and breadth of the material ? brilliant artifacts of great historical and artistic value.

?Archbishop Aram Atesyan had already begun archiving the artifacts in the various Armenian Orthodox Churches in the city. He became our guide, teacher and good friend through the long and arduous process of identifying, selecting, collecting, studying, photographing and archiving.

?Our adventures,? she said, ?took us on ferries, buses, taxis and hikes, often with frustration resulting from inadequate maps for finding the churches on both the European and Asian sides of the city. We visited treasuries, often in the far reaches of church buildings, met church members, most of whom were excited to learn we were studying their precious objects. Sometimes we had to leave behind spectacular pieces because of our inability to gain access for a variety of reasons.? Some items, for example, were preserved behind glass and could not be disturbed without damaging them.

The earlier pieces, Mr. Marchese said, ?provide a link with an older tradition that doesn't survive except in examples expressed in more concrete forms ? like wall paintings, frescos, mosaics.?

?We were struck by the anatomical accuracy of the Crucifixion, the stretched muscles of Christ depicted on the cross were accurate,? he said. ?The artisan captured such scenes in a sensitive display of emotion and passion ? but in miniature?

According to Ms. Breu: ?The most significant piece in terms of skill level is a miter dated 1800.

?The embroiderer used a wide variety of yarn types and stitches,? she said. ?The workmanship is so fine that the face of the centurion watching in amazement at the resurrection of Christ is created in a three-by-two-centimeter area,? or six square centimeters, which is less than one square inch.

?The face is executed in smooth silk floss offset against the heavier textural quality of the surrounding metal, with detail so exacting as to depict wrinkled skin and single strands of facial hair,? Ms. Breu added.

In another very detailed miter, Mary is framed with pearls as she stands on a serpent with an apple in its mouth.

?I have always wondered what the women of this great geography were doing as their men designed and built the magnificent monuments and fought in the many wars waged on these lands,? said Nancy Ozturk, coordinator of Citlembik, which published the book. ?And now a bit of this puzzle has been solved.?

?The congregations, mostly illiterate at the time, ?read? the Gospel stories through the images on the cloth and were awestruck ? as we are ? by the richness of the silk cloth, the colorful embroidery and the generous use of precious jewels,? she said.

Ornate textiles are still being used in church services, often the only place people could get glimpses of them. ?But many are irreplaceable,? said Father Tatoul Anoushian during a recent tour of the five-room museum. ?The church established two girls? schools in the 1820s just for this kind of work. But unfortunately we haven?t got anyone now with the skills needed to produce new ones.?

More than 70 churches served the Armenian Christian population of Istanbul at the beginning of the 20th century, but only about 30 survive, the researchers say, as the cultural heart of a population decimated by the genocide ? a term disputed by Turkey ? that began in during World War I.

It is rare to find such a trove of cloth-based items that merit study. ?Textile objects, because of their ephemeral nature, do not last long, especially when they are used, as they were in the Celebration of the Divine Liturgy,? Ms. Breu said. Many other examples were destroyed by the many fires that plagued Istanbul and its wooden buildings over the centuries.

?The importance of textile objects is often minimized because they come from a tradition of ?women?s work? usually associated with the home,? Ms. Breu said. ?But these objects illustrate the skill and devotion of Armenian women to their church. It offered them a means of self-expression in the public sector and of participation in their religious rituals.?

Some of the more fascinating items include the oldest dated miter from 1681, another that lacks a date but is believed to be about a century older, and a pair of liturgical slippers intricately adorned on the soles with images of a scorpion and a snake, a sort of final barrier between the priest and evil temptations. There are also tunic collars for choir members, veils for covering the chalice, banners, crowns, canopies, cases for patriarchal staffs, altar curtains and kerchiefs for the handling of crosses.

?It was truly a labor of love,? Ms. Breu said, ?with the usual difficulties and delights, but with immeasurable rewards.?

Not the least of these, she said, was adding to ?the empowerment of Istanbul Armenians to celebrate their important past.?