Below are translated excerpts from the interview which covered several domestic and foreign topics.

Shoj: is an independent country for the last 15 years. What are the most significant achievements and failures during the same period?

Kocharian: One of our first tasks was to form a State of and Authority.  The most important issue in front of us was to undergo effective and active changes and establish free market mechanism … The collapse of Soviet Union had brought Armenia into a difficult situation ? We needed to create the basic components of an independent state such as governmental authority, Army, economy, etc. ? had to face the new reality and circumstances ? Statistical figures confirm that we have coped the transitional period with success? Nagorno Karabagh remains as the most difficult task so far.

Shoj: What are the measures you are undertaking in order to step out of the energy crisis facing your country, knowing that does not have natural petrol and gas resources?

Kocharian: I would not say we have energy crisis ? We do not have energy resources, nevertheless, we are exporting electrical energy to neighboring countries? Today we do not have any foreign debts related to natural gas or electricity ? We are building some 50 hydroelectric stations and we had restored the nuclear power station closed during the Soviet era? We are thinking seriously about our energy security, this is why a second gas pipeline from to is being constructed now?

Shoj: The conflict between and on the background of the Nagorno Karabagh problem was the first bloody ethnic conflict that erupted in the ex-Soviet . After 12 years of truce what are the prospects of the peaceful solution in Karabagh?

Kocharian: I would like to clarify a point. The conflict is actually between and Nagorno Karabagh ? After the collapse of the Soviet Empire two independent states emerged: The Republic of Azerbaijan and the . We believe that the legitimacy of Nagorno Karabagh as an independent state is beyond any doubt. There was an attempt to subdue Karabagh to , as a result the war exploded ? 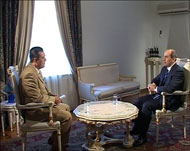 Shoj: Today some 20% of the Azerbaijani territory is under the control of Nagorno Karabagh forces? Is there any progress in the negotiations with regarding Nagorno Karabagh?

Kocharian: The main problem is that insists on the integrity of its territory and in doing so it believes that Nagorno Karabagh should be included in . The Soviet Union was the last Empire? Dramatic changes took place, all the map of changed, have a look at what happened in the Balkans? We are not against the territorial integrity of any country? but we say that both and Nagorno Karabagh have the right for territorial integrity, because they both have equal rights? Nagorno Karabagh was never part of the independent . I myself was born in Nagorno Karabagh and I commanded the independent movement there in the past ? Today a whole new generation exists, who don?t know the Azeri territories and would not imagine living in a foreign country.

Shoj: Will Armenia, or for that sake, Nagorno Karabagh raise claim to only the administrative borders of Nagorno Karabagh or to the 20% of the Azeri territory under the control of the Armenian forces?

Kocharian: There are two false claims, the first is the occupation of 20% of the and the second is the one million Azeri refugees. The real figures are entirely different ? In fact the number of Armenian and Azerbaijani refugees are the same (if we exclude Nagorno Karabagh). During the Soviet era there were about half a million Armenians in . Where are they now? Some of them live in , others in and a third group is scattered all around the world. As far as the territories are concerned they do not represent 20%, they are significantly less than that ? We have always maintained and repeated that, except the corridor between Karabagh and Armenia, we are willing to discuss the return of these territories, something which is in fact a subject of negotiations these days ? If Azerbaijan had cared for its refugees it would have regained these territories long time back by signing appropriate agreements ?

Shoj: What are the political ambitions of Nagorno Karabagh? Is Karabagh aiming to be an independent state or wants to be part of the ?

Kocharian: The legal situation of Karabagh indicates that Karabagh is an independent republic. The authorities there are strengthening the State institutions. As far as is concerned, both possibilities are suitable and I believe that in the future the relations between the two countries will develop towards confederation ? Future generations will define the nature of this relationship.

Shoj: The Armenian people suffered massacres in the beginning of the 20th century by the . Today there is extensive discussion about this topic. What are your main demands from the Turkish Government: Is it the recognition of the Genocide and the consequent apology or you would like to ask for compensation for the relatives of the victims?

Kocharian: Whoever has been harmed by these massacres can ask for compensation. Many Diasporan Armenians have the legal right to demand compensation. Armenia has its own demands, mainly due to the absence of diplomatic relations and the natural neighborhood relations with Turkey and the attempts of Turkey to hamper Armenia by blockading communication means, in addition to the policy adopted by in relation to the Karabagh problem ? We have inherited a big burden of Armenian – Turkish relations ? The past cannot be forgotten, but there should exist a natural process of reconciliation between the two peoples, something which requires the acknowledgment and repentance from the side that perpetuated the mistakes and crimes – call it the way you want -, but today there is no desire [from Turkey] to recognize its guilt.

Shoj: According to a certain viewpoint, the issue of the Armenian Genocide recognition has been brought up only recently, coinciding with the negotiation of Turkish membership to the European Union.

Kocharian: The issue of the Genocide recognition has been there for a long time. Maybe lately it was discussed in a wider context. as an independent state has expressed its position in 1998 in the United Nations ? This was long time before ?s negotiation with the European Union. Therefore I do not want to directly connect the two issue, but during the period of ?s negotiations to join  the European Union the subject of evaluating its own history is brought forward. This is why we are awaiting the expression of repentance on what happened. There should be a conscious and rightful evaluation of the past, in order to avoid repetition of these mistakes in the future.

Shoj: In your opinion is that enough to start normal relations with and how would you evaluate the nature of these relations today with ?

Kocharian: Today there are no relations. Our position is very clear. We are ready to build up diplomatic relations with today and without any preconditions ? But the Turkish side insists on preconditions such as: agreement with , withdrawal from Karabagh ? These are unacceptable conditions ? The Greeks could do the same by refusing trade with Turkey if no serious steps were taken in the resolution of the Cypriot Problem, but international experience has showed that common trade and cooperation always help in surpassing the difficulties. For example, there is the Coral Islands problem between and but no side regards this as a condition to establish commercial relations.

Shoj: There is a neighbor with whom you have good relations: . What is your country?s position on ?s nuclear program and the pressures exerted on .

Kocharian: The relations with are developed in a dynamic way. There are no disagreements between the two countries. We have large scale trade exchange with . With the Iranians we are carrying out huge energy projects compared to the capacity of ? We consider as a major country in the region and we have historical relations with . We consider the Iranian people as the heir of an old civilization and we respect this civilization. The Iranian nuclear program is a very sensitive problem between and the West, especially the . We believe that the diplomatic solution of this crisis is the safest way out. We believe that sanctions against Teheran will not be effective neither will any military action, which could have catastrophic results in the whole region.

Shoj: is the main ally of in the region. What is the secret of the good relations between and ?

Kocharian: We have inherited a rich load of historical relations and cultural exchanges throughout many generations, besides the existence of common interests for centuries. We are keeping this heritage and trying to activate it in our common interests. Up to this point we have succeeded in doing so ? We work according to a policy of synthesis of the interests of the major powers in and not confrontation. We try to avoid what our partners perceive as dangerous to their security.

Shoj: There is a large Armenian community in the . What is the nature of the relations between your country and the Arab World. Where do the Arab countries stand in the foreign policy of ?

Kocharian: We have very good relations with the Arabs. These relations began as a result of the bloody events that happened against the Armenians in 1915, when the Arabs embraced the Armenians in their countries and assisted them to stay alive and sustain themselves in small Armenian societies within the bigger Arab population. We nurture respect towards the Arabs for this stance. For a long time the Armenians and the Arabs lived under the yoke of the and that historical period was reflected in the literature and the culture of the Arabs and the Armenians, relaying warmth to the relations between the two nations. This provides a suitable background to build relations on the official level ? Through the life of many generations the Armenians proved that they are hard-working, loyal citizens and real partners. Through them these positive values are conveyed to our relations with the Arab countries. We highly value this capital, this is why we are friends with the Arab World and we will stay so. I believe this friendship is not built on mere calculations of interests but it is validated through the experience of generations of our two nations.