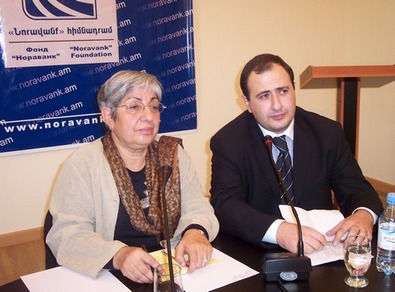 In the recent years the name of Fethiye Cetin became rather well-known within the Armenian public. She has been a lawyer of ?Agos? newspaper founder Hrant Dink and his family for many years. Cetin became famous especially after she published memoir novel ?My Grandmother?, where she, based on the facts, told us the story of her grandmother Heranush Kataryan?s life.

She was one of those Armenian children who were captured and Islamized during the Armenian Genocide. It should be mentioned that the book catalyzed some way the opening of question of the Islamized Armenians in Turkey.

?My grandmother? was followed by other books of the familiar content. Besides, the book stimulated people who were on different stages of estrangement started to study their roots and the true stories of their ancestors. In 2006 ?My Grandmother? was translated into Eastern Armenian and published in Yerevan and became one of the best-sellers.

In 2008 it was republished for the second time and the author was present on the presentation. The other day we had a conversation with Fethiye Cetin and below we present it to you.

Question ? Your ?My Grandmother? book has already been translated into several languages, last year in Yerevan it was republished for the second time in Eastern Armenian. How do you think, what is the secret of the success of the book?

Answer ? In my opinion the main reason why the book drew the attention is that in the centre of its base is a human being with his pain, feelings, and relations. The events in the book are presented from the human and conscience point of view. The sincere and simple language of the book is also important. The bitter story of my grandmother?s life was so important for me that I decided to put it down. But I could not carry it out for quite a long time because I thought that this story should be written by a good writer in order to influence the reader. I talked to the writers but they refused to help me. That is why I decided to write that book myself.

Question ? Last year in a number of Armenian cities the presentation of ?My Grandmother? was arranged. I know it is your first visit to Armenia. Can you tell us about your impressions?

Answer ? Armenia did not seem to be strange for me. I had an impression as if that was not my first visit. This country can embrace one with sincerity, distinctness and purity. It is like the place of my birth. While walking in the streets I felt as if I was in the places where I had spent my childhood. People are very cordial, sincere and hospitable. I was deigned with great and warm attention but at the same time I was greatly impressed by the sorrow I saw in the eyes of the nation, which tries to understand and to receive the answers. I acquired many good friends in Armenia. This journey even increased my determination and firmness to struggle. The most important is that I got acquainted with the new members of my family in Armenia. I will never forget those cordial hours I spent with them(1).

Question ? Your book played a great role in the actualization of the problem of forcibly Islamized Armenians in Turkey. This topic, which was regarded later as a taboo, started to be discussed and talked about. I would like to know your approach to this matter.

Answer ? Yes, this book, because of the political pressure, revived the memories which had almost were forgotten and consigned to the oblivion. Those people began to remember the stories told by their grandmothers and grandfathers. For the other group of people, which did not know what had happened in 1915 or those who adhered to the official opinion, this book caused a serious turnaround. They began to contravene the official opinion, study the history of their families. The writers and scientists expressed an opinion that ?My Grandmother? aroused the interest and the wish to ask the questions.

Answer ? According to what I have read and to my observations Armenians, who lived in some definite places, due to the pressure and the self-preservation instinct (before 1915) converted their faith in large numbers or individually. For example there are cases when the whole population of the village converted its faith. This group preferred alevizm. Besides this group many Armenian women and children were Islamized on different reasons in 1915. And, as you mentioned above, some families, which stayed there in 1915 present themselves Muslims, but in reality they secretly carry on their traditions and preserve their language. Those people are called crypto-Armenians. It occurs that this group preserved it ethnicity and religious stripe through the marriages between relatives, though it contradicts their traditions.

Question ? The problem of ethnicity, in my opinion, is one of the most important and delicate ones. It is from put on the agenda time to time. In Turkey, which aspires to join the EU, there are still some people who have to hide their ethnic identity. How do you feel about it?

Answer ? There has been a real war between the changes and the status quo in Turkey recently. It is hard to change but the direction of the changes give as hope. The official policy, which used to say that there were no Kurds, prohibited Kurdish, today opens a TV-channel in Kurdish. The prime-minister says sentence in Kurdish and the president says that ?the differences are our wealth?. No matter how difficult it is, any way finally those changes will come to a good end.

Question ? There are also some speculation concerning the issue of Islamized Armenians. Some scholars, politicians regard it as a menace.

Answer ?There is a ?state tradition? according to which the ethnic roots of people become a subject of the discussion, some ethnic groups are believed to constitute menace and the representatives of those groups are prevented of taking some key positions. Though this tradition still exists the public opinion against it is formed within the Turkish society. For example, the words of Janan Aritman, the deputy from the Republican People?s party, about the ethnic origin of the president Abdullah Gul were criticized hardly both in the mass media and in his own party.

Question ? The role of Christianity for the Armenians is rather big. According to the diffused opinion the true Armenian should be a Christian, and because of this approach it is a bit difficult for us to accept the Armenians of other religions and Armenians who adopted Islam as true Armenians. What is your stance on this issue?

Answer ? I belive that only person himself can make a decision in the issue of his religious and ethnic identity. In my opinion the sphere of identity and the belonging should be free of any pressure or influence. A person should be free to present himself as he wants and we have only to accept his preference. In this matter I can have opinion only concerning my identity and belonging. Thus, I think that priority of the identities and their hierarchic classification are nobody?s business.

Question ? It is known that there are a lot of people of mixed nationality in Turkey, just like you, but the developments among those people are different anyway. Some of them consider their Armenian roots important, they study their descent. Some people defy it, while the other group take a radical position and accept Armenians as enemies. Turkish sources mention that even among the radical nationalists there are people of Armenian descent. How can you explain this?

Answer ? If people hide their origin or religious stripe because of fear, threat or isolation, if they try to prove that they belong to the majority then such an atmosphere contradicts to the global values, human rights, democracy and nature. Such an atmosphere can neither be protected from the ethic nor from judicial sense. Hiding and rejecting your roots under the pressure, threat or because fear is, first of all, inhuman.

Question ? Thousands of people just like your grandmother hid the reminiscences of those bitter and traumatic events in their soul and one day they started to feel the aspiration to share it with somebody. In your opinion, how important is the role of the traumatic memory in the identity of a person?

Answer ? In my opinion the first step to overcome the memories about traumatic events is to be able to talk about it. In order to get rid of the trauma it is necessary to talk about its causes, about the bitter reminiscences. That is why it is very important to create an atmosphere where a traumatized person can speak openly.

Question ? Can the ethnic origin cause that the state show the differentiated approach towards its citizen? How do you treat this as a lawyer?

Answer ? According to the judicial principles, the states are obliged to treat their citizens equally and do not treat them preconceived. The principle of equality and the ban on the preconceived treatment are the rigorous principles of international law. And the ethnic origin cannot be used as a negative argument against people.

Question ? We also know you as a lawyer of Hrant Dink. What can you say about the latest developments on this case?

Question ? As well as I knows, you have planned to write another book about the Islamized Armenians. Though I know, that you are very busy person, I would like to know when it will be ready.

Answer ? Yes, I have such an idea and I would like to finish that work as soon as possible.

Question ? Thank you for the interview and I hope that after the publication of the new book we will have an opportunity to meet you in Armenia again.

Answer ? Thank you and I hope that we will meet in the shortest possible period.

(1) The heroine of ?My Grandmother? Heranush Kataryan (the grandmother of Fethiye Cetin), had two brothers: Khoren and Hrayr. Khoren was just like his sister captured by a Muslim during the deportation and later Islamized and called Ahmet, while her small brother Hrayr, according to Heranush?s mother, died during the deportation. After the publication of the book in Eastern Armenian I was visited by a man whose name was John Kataryan, and who told and then proved with various evidences that he was a grandson of Hrayr Kataryan, who was believed to have died. During Cetin?s visit to Armenia I arranged their meeting. After comparing the facts we knew, photos, stories and even hereditary characters it became even clearer that Hrayr Kataryan had not died, but he had saved by a miracle, appeared in the orphanage and then moved to Georgia. May be this very interesting story will become a subject for one of her books in the future (R.M.).

The interview was conducted by Rouben Melkonyan