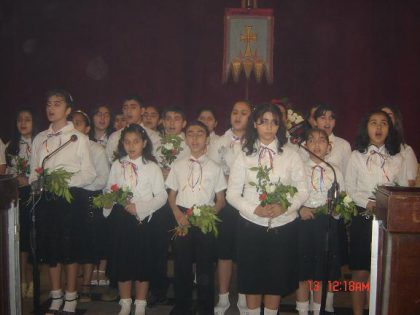 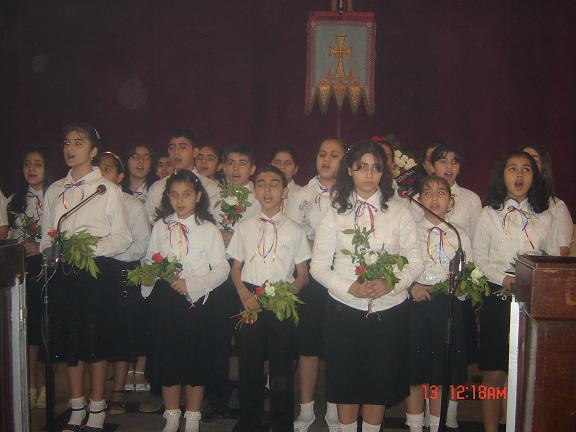 More than 1000 people attended the Divine Liturgy and memorial program at Saint Gregory the Illuminator Cathedral in Baghdad on the occasion of 24 April, commemorating the Genocide perpetrated by Ottoman Empire against the Armenian population in the years 1915-1923.

After the Holy Mass a requiem service was offered for the repose of souls of our Martyrs.

The program included poems, religious hymns and national songs, solo and choral songs, with the participation of the Cathedral?s “Zvartnots Choir“, “Sharagan Choir” of the Youth Organization of Iraqi Armenian Church (HEG) and students from the Armenian School.

His Eminence Archbishop Avak Asadourian, the Primate of the Diocese of the Armenian Church of Iraq delivered his message entitled “April 24 is the chalice offered by our people”.

The Memorial program concluded with visit to the Martyrs' Monument at the courtyard of the Cathedral by the clergymen, faithful and the representatives of Iraqi Armenian community centers. Flower wreaths were laid at the khatchkar (cross-stone) Monument.

*An Iraqi Armenian settled in Yerevan

Even the small Armenian community of Basra (Iraq) commemorated yesterday, April 24, the beginning of the second campaign of genocide initiated by the Ottoman government with the arrests, in the night between 23 and 24 April 1915, of the elite members of the Armenian community of Constantinople.

In the Armenian Apostolic Church of the Virgin Mary, the priest, Father Torkom Torkomian, reminded the faithful the innocent victims of that dark period.

Interviewed by Radio Sawa, Fr. Torkomian spoke also of the Armenian community of Basra: 120 families for a total of about 600 people. Only one church, the one of the Virgin Mary, one of the oldest in Iraq dating back to 1736, after the two others churches were closed, and a community heavily affected by recent events that had as a result the flight from the city. A flight that the priest hopes can be reversed by the coming back of the Armenian people as, these are his words, the situation is now “slightly improved.”

Photos from the Baghdad commemoration: