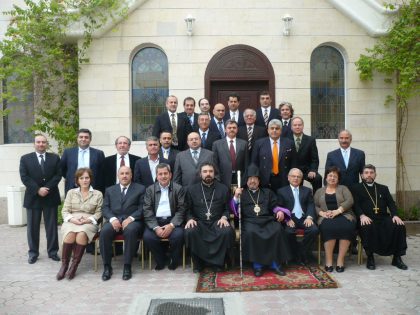 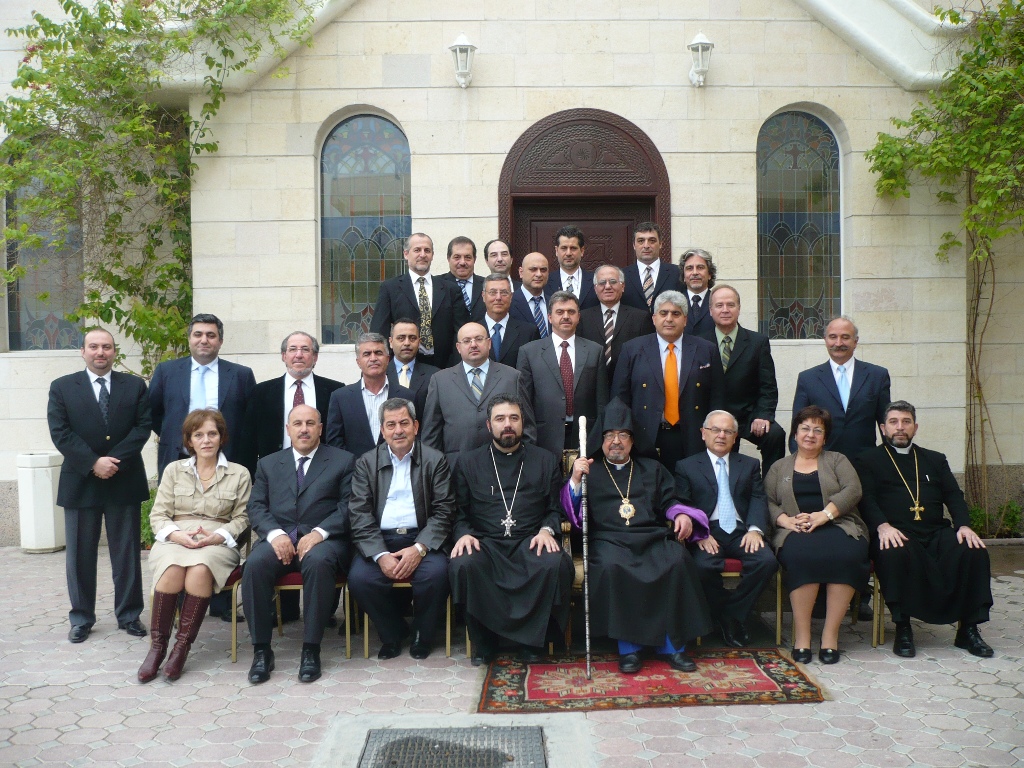 The 18 members of the Legislative Council of the Armenian Prelacy of Kuwait and the Arabian Gulf has convened today in Sharjah to discuss topics related to the Prelacy.

On the agenda were several important issues, but the most imminent ones were the followings:

– The construction of the Holy Martyrs Armenian Apostolic Church in Abu Dhabi:

Scheduled to be completed in 2014, the Church will be consecrated in 2015, on the occasion of the 100th anniversary of the Armenian Genocide. Currently 20% of the building is visible. A community center would be constructed next to the church, where the weekly Armenian school and the “Saints Sahag & Mesrob” Sunday school would be hosted.

– The possession of the plot of the Armenian Church in Kuwait:

For the last 60 years the makeshift church has been hosted on a land belonging to Kuwaiti brothers, who have recently asked the Armenians to vacate the plot in order to construct there residential buildings. Sheikha Fariha Al-Ahmad Al-Jaber of the ruling family has vowed to support the cause of building an Armenia church in Kuwait on a separate land provided by the Emir, but there are no concrete developments on this issue. Dr. Jan Bebejian, an active community member, informed Azad-Hye that “the 50th anniversary of the Armenian school celebrations in 2011 had ended up by collecting 50.000 KD (about US$ 176,000) which was donated to the church fund, thus inspiring our people to donate more”, adding that “the process of augmenting the church fund is continuing by different social and cultural activities”.

– The plight of the Syrian Armenians:

As more than 70% of the members of the Armenian Church in the Gulf countries hail from Syria, the Council is thinking about providing financial support to Syrian Armenians. Many individuals help their relatives directly, but still there is need to take part in pan-Armenian initiatives, especially that the Gulf Armenians did not help the Iraqi Armenians in the past and they feel time has come to rectify this.

– Donation for charities and nationwide purposes:

UAE Armenians are known for their generous donations. Few years ago 5 million dollars was raised in Dubai for the Armenian Cause Committee, many Armenians in the country provide direct donations to institutions abroad. For example Varouj Nerguizian donated a large sum to the Mesrobian Catholic Armenian School in Beirut while Hrayr Soghomonian has pledged US$ 1.5m for the construction of a building at the Bikfaya Monastery in Beirut (Catholicosate of Cilicia), etc.

– Support to the Embassy:

UAE Armenians funded the construction of the building of the Armenian Embassy in Abu Dhabi in the early 2000s. However, the relations between the Prelacy and the Embassy remain strictly official, despite the fact that many Diaspora Armenians obtained Armenian citizenship in recent years.

– Involving citizens of Armenia in the Prelacy structure:

The number of citizens of Armenia is increasing in the Gulf countries but the majority of the newcomers from Armenia are not much involved in the community life. The Legislative Council has appointed several citizens of Armenia in the past at certain posts in the local National Councils, but until this moment no citizen of Armenia has been elected into the Legislative Council. It would be difficult to involve more citizens if they feel that they do not have legitimate representative in the structure.

The Legislative Council is highly concerned about the Armenian language. In Kuwait the daily school continues to educate hundreds of students in Armenian language, history and religion, but in the UAE the weekly school is not sufficient to educate the children on Armenian topics in the same way. The Sharjah and Abu Dhabi schools are managed and staffed with amateur housewives.

Many young people in the community face work related issues, but they do not find any kind of support, not even at the level of mere consultancy or moral encouragement.

Almost all members of the Legislative Council have been elected to their posts for about 20 years without major changes. There is a need for new blood. Out of 5.000 Armenians living in UAE less than 250 are registered. During the last elections members to the Legislative Council were elected with just 80 votes, mainly consisting close friends and relative. The circle is very narrow.

Photo of 2009 meeting in Sharjah

Newer PostDr. Melkon Kalayjian: There is still a large Armenian community in Aleppo that needs to be served by professionals
Older PostBuilding a nation