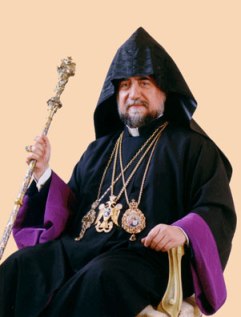 Fifteen journalists from Canada and the United States, representing different types of media, met with His Holiness Aram I in Antelias. In his welcome speech, Catholicos Aram I talked of how the ancient local churches of the Middle East, which have been deeply rooted in the region for over 17 centuries, have contributed to its economic, intellectual, and cultural development.? He went to note that ?the roots of Christianity are in the Middle East, and that from the beginning, the Church Fathers have contributed to the theological discourse on Christian faith and on ways to witness their faith in the context of the other monotheistic religions.?

His Holiness then responded to questions raised by the visitors.

Question 1. What are the challenges that Christians in the Middle East are facing today?

Question 2: How do you explain what is happening to Christians in some countries of the Middle East?

Answer: ?It is important to approach this question from the right perspective. Fundamentalism in Islam is not only a threat to Christians, but also to Islam itself. It is a serious threat to security in the region. I am sure that many Muslims will share this understanding with me. We, therefore, need a common strategy. Christian-Muslim dialogue and cooperation is the best strategy. I would like to remind you that Muslim political and religious leaders were the first to condemn the attack and massacres in the Church in Baghdad.?

Question 3: How do you assess the current status of Christian-Muslim dialogue?

Answer: ?Christian-Muslim dialogue is not new, but in the past ten years it was given a new emphasis and a new orientation. While I welcome these new initiatives, I would like to see the following happen: First, political leaders should be actively engaged in these dialogues, for in the end political and social structures should change as a result of the dialogue. Second, the agenda of dialogue meetings should include issues that affect the daily lives of the people. Third, dialogue meetings should be regular and not be held merely to respond to specific situations. Finally, dialogues should lead to cooperation on common projects?. He then added, ?as a result of globalization, people of different faiths are living together as neighbours. People are involved in existential dialogue. Our task is to help people discover their neighbours, learn to respect them and build mutual trust. Only through such a process will we build sustainable relations.?

Question 4: In another question His Holiness Aram I was asked to assess the Special Synod for the Middle East held at the Vatican last October.

He then added, ?Christians and Muslims have lived and worked together for many centuries and the current challenges require that they continue working together. I welcomed the final statement of the meeting because the Synod invited Muslims to face common challenges together with Christians.? He then continued, ?Although we have different perceptions of the ?truth? of our faiths, different sources of identity, we must learn to respect our differences and face the same problems. On the other hand, we share common moral and ethical values, we should, therefore, build our common strategies on what we share. Christians in the Middle East can help build bridges in Christian-Muslim relations in other parts of the world?. And finally, he said, ?I appreciated very much that the Muslim representative at the Synod in Vatican acknowledged the constructive role of Christians in building Middle East societies?.

Source: Website of the Catholicosate of Cilicia, 16 November 2010
http://www.armenianorthodoxchurch.org/