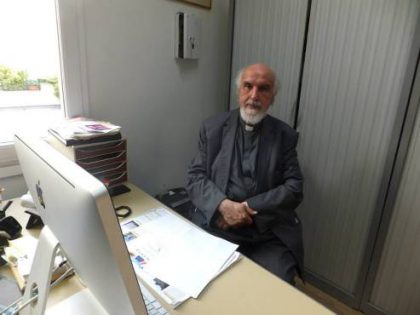 
One of the leading spiritual figures of the Armenian Church in Europe, Archbishop Norvan Zakarian, expressed in a letter issued on 01 July 2013 his decision to resign from his post in November 2013, after over 45 years of service.

His Eminence was holding the post of Primate of the Armenian Diocese of France and Pontifical Legate to Western Europe since 2007, serving at the headquarters of the diocese at the Saint John the Baptist Armenian Cathedral of Paris.

Until recently the website of the Catholicosate of Etchmiadzin said few words about his resignation, only mentioning that His Eminence was “retired and residing in France”. But in a news report posted on 31 July 2013, the same website mentioned that the Supreme Spiritual Council, held on the same day, has officially accepted the resignation. “The Supreme Spiritual Council also expressed regret regarding the resignation and the unsubstantiated allegations in the letter directed at the Mother See of Holy Etchmiadzin and the Catholicos of All Armenians”, the report went on saying.

Archbishop Zakarian's case has occupied the attention of many Armenians, who see it as a sign of the unhealthy conditions prevailing inside the Church.

The resignation letter condemns, in strongest terms, the “cult of personality” and mismanagement within the church, which under Garegin II have reached enormous proportions.

“The letter reveals that Archbishop Zakarian was constantly reprimanded by the Catholicos at different occasions, an attitude that has caused him great grief. This kind of behavior is unusual against a spiritual personality who is older than the Catholicos himself and has rich track of achievements”, says author and reporter Levon Sharoyan.

Archbishop Zakarian has been very popular in the Armenian community in France. He was one of the rare examples of true noble clergymen in our Church. The fact that he has preferred to keep his dignity instead of his post says volumes.

The latest episode of Catholicos's misbehavior with Archbishop Zakarian occurred on 29 June 2013 at the VIP lounge of Charles De Gaul Airport in Paris. In the presence of many Armenian officials and dignitaries from Armenian and outside, including Foreign Minister Eduard Nalbandian, Catholicos Karekin II, threatened the Archbishop by saying: “If by July 1 you don't reinstate him [Father Vatch? Hayrapetyan] to his position, then you have nothing to do with the Mother See.” The referred person has been the parish priest of the Armenian Church in Nice. He was under criminal investigation by the French authorities and was ordered to serve a two-year suspended sentence for beating a man.


In his resignation letter Archbishop Zakarian says addressing the Catholicos: “I have been noticing, for some time now, that hurting and insulting me has been a pleasure of Yours”. In another place he says: “perhaps You are not aware that [by doing so] You are crushing the dignity of human beings under your feet”. He refers to the increasing “cult of personality”, which he describes it as “tiring”.

For formalities sake, Archbishop Zakarian has asked that the timing of his resignation would be 01 November 2013, so that by the time of the upcoming Diocesan Meeting in Paris in October 2013, there would be enough time for the election of a new Diocesan head. But the Supreme Spiritual Council, headed by Catholicos Karekin II himself, did not want to respect this last wish and hastily accepted the resignation. Once more the Archbishop felt insulted, because his letter to the Supreme Spiritual Council, explaining his point of view, was completely disregarded and not even mentioned in the official press release. This was his last attempt to defend his rights, not only as an already resigned spiritual leader, but also as an individual.

The careful examination of the above developments shows, that a crisis is evolving in the Armenian Church. It is true that some may feel uncomfortable to discuss such issues outside the accepted norms, claiming that they could harm the image of the Church, but with the advancement of communications and the spread of social media, how could similar news be contained?

The actual concern should not be how to limit the damage through adhering to a policy of denial, rather by confronting the issues and finding serious answers to questions such as: Do the Armenians want to tolerate the above practices? And for how long? If the Catholicos is going eventually to resign, due to his incompetent character, why this should not happen earlier? Who can enable the happening of such a move?

Newer PostSar Sargsyan: We must save the old Armenian songs from oblivion
Older PostTalar Sakayian: I'd like to see Syria peaceful again