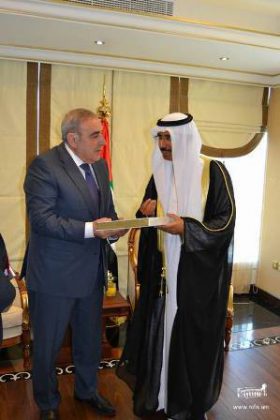 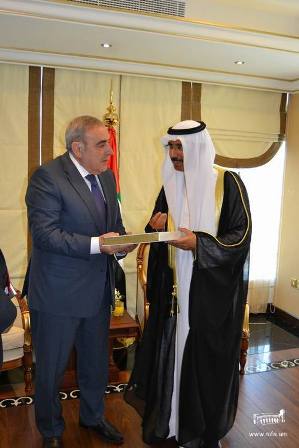 Ambassador Gharibjanian started his second year in office with a series of meetings and activities:

On 13 February 2013 His Excellency Ambassador Gegham Gharibjanian, the Ambassador of Armenia to the UAE, met with Her Excellency Sheikha Lubna bint Khalid bin Sultan Al Qasimi, the UAE Minister for Foreign Trade. The main topic of discussion was Armenia's participation in the upcoming 3rd Annual Investment Meeting (30 April – 02 May 2013), which will be held under the patronage of His Highness Sheikh Mohamed Bin Rashid Al Maktoum, UAE Vice president, Prime Minister and Ruler of Dubai.

The meeting will provide a comprehensive assessment of investment opportunities in emerging economies, with a special focus on some high growth regions. Ambassador Gharibjanian discussed details related to the second phase of UAE – Armenia businessmen conference, which is planned to take place during the same period.

In memory of Sumgait victims

On 22 February 2013, Ambassador Garibjanian attended memorial service in Saint Gregory the Illuminator Armenian Church of Sharjah on the 25th anniversary of Sumgait victims. The event was organized in collaboration with the two National Councils of Armenians in Abu Dhabi and Sharjah. In 1988 the Armenian population of the seaside town of Sumgait in Soviet Azerbaijan faced ethnic cleansing which is known now as Sumgait pogrom or massacres.

The Armenian students of Masdar Institute of Science and Technology took part at this event on 26 February 2013, in collaboration with the Embassy of Armenia. The event was hosted by the Student Affairs Office of Masdar Institute and organized entirely by the students with the aim of celebrating cultural diversity.

One of the 30 stands was the stand of Armenia where the history, cultural, science and tourism of Armenia was represented in an attractive form.

Meeting with the Chairman of the UAE's Federal National Council

On 03 March 2013, Ambassador Gharibjanian had a meeting with Mr. Mohammed Ahmed Al-Murr, the Chairman of the UAE's Federal National Council.

Mr. Al-Murr congratulated the re-election of President Serzh Sargsyan for a new term. One of the topics was the formation of joint parliamentary UAE-Armenia friendship committee in the near future and the activation of mutual visits and ties.

Mr. Al-Murr reaffirmed the invitation of Mr. Hovik Abrahamyan, the Speaker of the National Assembly of Armenia to visit the United Arab Emirates during the ongoing year.

Special reference was made to the significant contribution of the Armenian community to the economic, public, and cultural life in the UAE.

Newer PostKaren Sargsyan does not give the French Armenians a chance to feel nostalgic for the Armenian songs
Older PostVardan Marashlyan: Visiting Armenia is not enough. Repatriation is needed