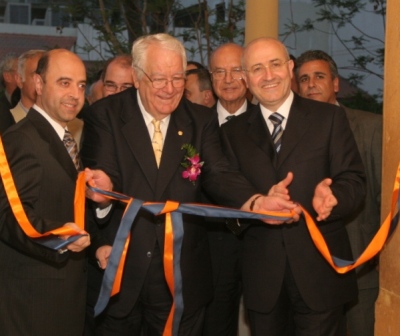 On Tuesday, 8 May, 2007, on the occasion of the Lebanese Press Martyrs' Day, and under the auspices of the Minister of Information, H.E. Ghazi Aridi, Haigazian University inaugurated the life work of world renowned press photographer Harry Koundakjian, at an exhibition entitled “50 Years of Photo Journalism”, in the Arthur Matossian Gallery, of the university.

The Mugar Garden hosted a crowd of dignitaries, media, family, and friends which included, former minister and MP Bahige Tabbara, Head of the Lebanese Press Order, Melhem Karam, President of the Press Photographers Syndicate in Lebanon, Jamal Saidi, Ambassador of the Kingdom of Belgium, H.E. Stephane De Loecker, The Head of the Union of the Armenian Evangelical Churches in the Near East, Rev. Megrditch Karagoezian, the representative of the Catholicos of the House of Cilicia, His Holiness Aram I, Father Krikor Chifjian, the Prelate of the Armenian Apostolic Church of Lebanon, Kegham Khatcherian, the Director General of the Ministry of Environment, Berge Hadjian, and the Vice Governor of the Central Bank, Alan Balian.

The program opened with a word of welcome by Haigazian University's Public Relations Director Mira Yardemian, referring to the martyrs, who were basically Lebanese journalist that sacrificed their life for independence, liberal thoughts and freedom of speech and expression.

University President Rev. Dr. Paul Haidostian welcomed the Minister of Information, and addressed the audience saying, “there are people who make history, others who write history, still others who read history. But there are also those who open windows into that history and shed light without discrimination on its darkest or brightest characters and events.”

Haidostian appreciated the high risk factor of journalism, and its mission, “the journalists pay a high price for their mission. It could cost them their life. Even though in present day Lebanon, journalism is sometimes mistakenly seen as a subjective, propagandist, political and partisan activity, we need to always remember that journalism is a mission, and if so, then martyrdom is one of its most painful consequences.”

Minister Aridi praised Koundakjian for his 50-year career, and appreciated Koundakjian's bold decision to return to his home, Lebanon, amidst the country's political instability.

“This gathering of people from the media, politics, art, photography, reflects a beautiful image of Lebanon, all surrounding Harry Koundakjian to appreciated his talent and sacrifices of his long term career”, noted Aridi.

Then President Haidostian and Minister Aridi presented Koundakjian with the University's token of recognition.

In his turn, Koundakjian, very touched and emotionally affected by the crowd, thanked the audience for being faithful and for being there. He promised the press that soon he will be returning to his beloved Beirut, ready to serve all the newspapers.

After the ribbon cutting ceremony, the audience followed Koundakjian in explaining and presenting his photographs, and the circumstances in which he shot them.

The exhibition featured some 75 photographs, reminding people of the 20th century's most dangerous conflicts, historical moments, as well as the world's famous stars and political figures.

Haigazian had the honor to include in this exhibition two world prize winning photos: “Princess on the Rocks”, is the photo of Princess Lala Lamia, daughter of the Lebanese Prime Minister, Riad El Solh, watching a water-skiing competition in Jounieh, Lebanon, in 1963, and “Please Save Me” is the photograph of a Lebanese taxi driver trapped in the wreckage of his car in 1962.

Other stars include, Brigitte Bardot deciding on a role with a director, Omar Sharif, Louis Armstrong, and of course Lebanon's famous singer Feirouz rehearsing with her husband, composer Assi Rahbani.

People were very touched in seeing the photo of Lebanese President Camille Chamoun posing with his martyr son Dany, as well as the one of parliamentarian and publisher, MP Ghassan Tueni, with his martyr son Gebran taken before one month of the latter's assassination.

The exhibition also featured photos from the Lebanese war, the Black September in Sudan, the revolution attempts in Yemen, the 2700th Anniversary of the Persion Empire, and world religious leaders during special moments.

It is worth noting that many special guests visited the exhibition during that week, enjoying a private tour with Koundakjian, including the Catholicos of the House of Cilicia, His Holiness Aram I, MP Walid Joumblat, MP and Annahar Editor in Chief, veteran journalist, Ghassan Tueni, Indian Ambassador, H.E. Nengcha Lhouvum, and the general public.

Veteran photographer, Harry L. Koundarkjian began his professional career in 1952, when he joined the Beirut French language paper, “L'Orient” and its sister Arabic publication Jarida, as the first press photographer in Lebanon.

Called “Harry the Horse” by his colleagues, because of his tenacity and indefatigable energy, Koundakjian has been in the thick of danger many times during his over 50-year professional career in more than 22 countries.
Throughout his career, Koundakjian has been on a first name basis with many of its leaders including Jordan's King Hussein, Egypt's Sadat, Syria's Assad and Libya's Kadafi. His photos – many, front page – have won him honors, including the Associated Press Managing Editor's plaque, and the World Press Photo Award.

Below photos:
1- During the tour of the exhibition with the dignitaries.
2- Haigazian University President Rev. Dr. Paul Haidostian (left) and Lebanese Minister of Information Ghazi Aridi (right) present Harry Koundakjian with the University''s token of recognition. 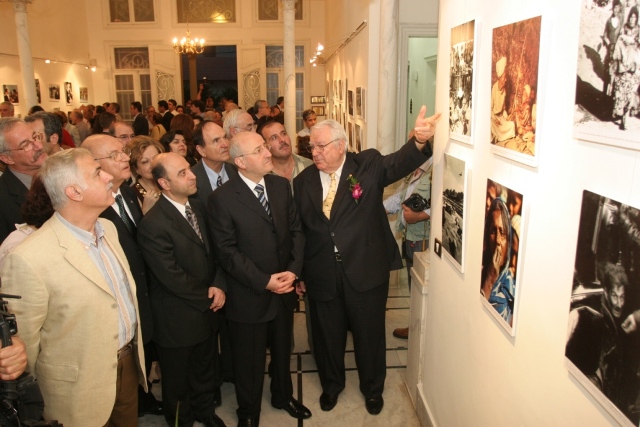 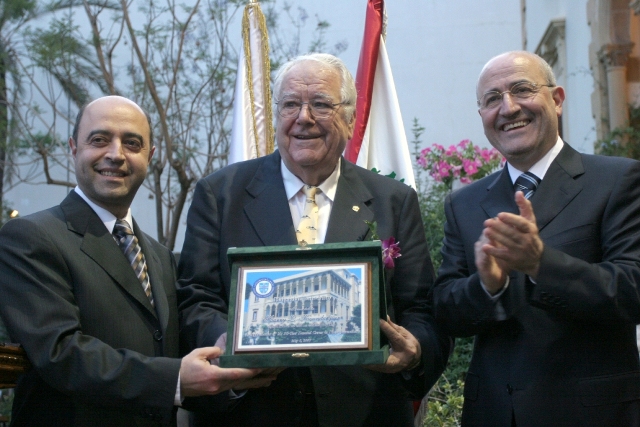