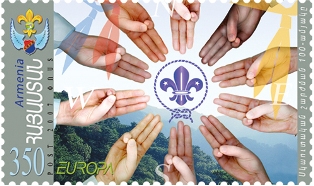 The winner by Scouts votes of the 2007 EUROPA stamp competition is the Armenian operator HAYPOST.

EUROPA stamps are special stamps issued by European postal administrations / enterprises, under the aegis of PostEurop, and that have Europe as their central theme.

The EUROPA stamp best design competition is a yearly event which takes place during PostEurop?s Plenary Assembly. The first competition, in 2002 saw Malta win best stamp design. Following winning stamps from 2003 to 2006 were from Monaco, Greenland, Iceland and Ukraine.

In order to celebrate the ?100 years of scouting? and to stimulate the interest for EUROPA stamps among young scouts, it was decided that the EUROPA competition would be opened to scouts around the world, and they were invited to vote on-line for the stamp they liked best.

On the 9th May, Europe Day, in Portoroz, Slovenia, Scouts and PostEurop launched the 2007 issue of the EUROPA stamp competition, celebrating scoutism, and in which over 50 postal operators in Europe participated.

As revealed during PostEurop?s Plenary Assembly in Vienna, Austria, the winner selected by the majority of voting scouts is the stamp issued by Postal Operator of Armenia: Haypost.

?On behalf of HayPost in Armenia, we wish to thank PostEurop for organizing this invaluable competition and especially our voters for having chosen the Armenian EUROPA stamp for the 2007 PostEurop competition. This stamp symbolizes the international peace generated by the scout movement, and the union between Armenians and all cultures in the world,? stated Hans Boon, Director General of HayPost.

POSTEUROP: is the association which represents European public postal operators.It is  committed to supporting and developing a sustainable and competitive European postal communication market accessible to all customers and ensuring a modern and affordable universal service.  Members represent 2.1 million employees across Europe and deliver to 800 million customers daily through over 175,000 counters.