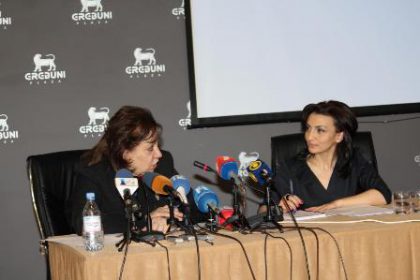 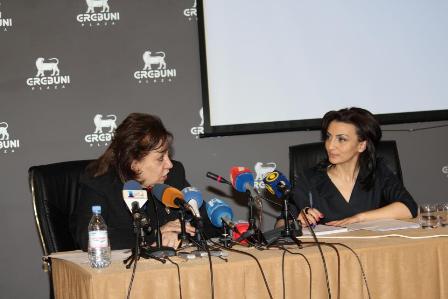 On 18 January 2012, Minister of Diaspora Hranush Hakobyan gave a final press conference and touched upon the ministry's activities in all spheres.

One of the major spheres of the ministry is the preservation of Armenian identity.

More than 30 Armenian Sunday schools have opened in Europe, the Russian Federation and other CIS countries.

The ministry has implemented the program called “Sister Cities” between Armenian schools in Armenia and the Diaspora.

The ministry has created online versions of unified textbooks in Western Armenian for elementary, secondary and high school students and has sent them to the best experts to receive their feedback.

Through the “Support to Communities” program, the ministry has delivered 50,000 instructive, children's and popular science books, as well as DVDs, CDs and the RA state emblems.

The RA Ministry of Diaspora had declared the year 2011 as the “Year of Youth”, and within the framework of that, the ministry organized the “School for Young Journalists” and the “Summer School for Young Diaspora Armenian Leaders” programs.

The ministry started working on expanding the opportunities of study for Diaspora Armenian students studying at universities and intermediate vocational schools in Armenia, their education, social issues, as well as issues related to integration in Armenia.

A delegation of ten Diaspora Armenian students and youth from the United States, Canada, France, Greece, Lebanon and Russia visited the ministry and carried out tour programs in Armenia.

The World Armenian Congress and the Union of Armenians of Russia organized five major awards ceremonies, as well as the “Homeland, This Is How I See You”, “Piece of Homeland”, “Best Youth Organization” and “Mother Language Teacher” contests.

One of the key youth programs was the “Our Greats” program.

The first 12 Master's students of the Department of Diaspora Studies received their diplomas. The department was established by the RA Ministry of Diaspora.

The ministry has also developed and implemented a number of events within the framework of regional programs.
The ministry has organized the concerts of art groups and performers, master's courses for dance instructors of Armenian dance groups and courses for professional orientation, showed support to several Diaspora Armenian media, the Union of Iraqi-Armenians in Armenia, provided textbooks, supporting materials and popular science books to the educational institutions and culture homes of the regions and organized youth gatherings.

The ministry organized the Days of Diaspora Armenian Communities in Armenia that included “Days of the Iranian-Armenian Community in Armenia” (solemn ceremony dedicated to the 80th anniversary of Alik Daily, exhibition called “Armenian Churches in Iran”, the first screening of the film “New Julfa: To be?”), the “Days of the Istanbul-Armenian Community” (the first screening of the animated film “Groong”, a ceremony dedicated to the 70th anniversary of Marmara Daily, exhibitions of the traditional costumes of the Talar Song and Dance Group in Yerevan and Gyumri and the concert of Maral Dance group).

The ministry held 12 forums, conferences and roundtable discussions to consolidate the potential of all Diaspora Armenians, use that potential for Armenia's economy, strengthen relations between professionals in Armenia and the Diaspora, as well as develop and implement joint programs; the festival “Development of Homeland-Diaspora Business Ties”, “The Role of Armenian Women in the Diaspora”, “The Prospects of Development of the Diaspora in the Globalizing World”, “Forum for Representatives of the Chambers of Commerce and Industry and Businessmen”, “Traces of Armenians in Brazil”, the 2nd Pan-Armenian Forum of Architects and Construction Engineers, the session of the executive body and coordinating council of the 5th Pan-Armenian Forum of Journalists, the “Golden Ladle” Armenian Cuisine Festival, the 3rd Euro-Caucasian Congress of Cardiology, the Armenian Agroforum Pan-Armenian Conference organized with the RA Ministry of Agriculture, the international conference devoted to the 200th anniversary of the Mekhitarist Congregation in Vienna, the international workshop-conference on “Sectors of Armenian Religious Denomination: Challenges and Opportunities”, as well as the conference on “Garegin Nzhdeh's Activities in the Diaspora” organized in association with the National Academy of Sciences of Armenia and Yerevan State University.

Out of the forums and conferences, Minister Hranush Hakobyan set aside the international conference on “Prospects of the Development of the Diaspora in the Globalizing World” and the Pan-Armenian Forum for Heads and Representatives of Diaspora Armenian Communities”, which saw a turnout of 5500 heads and representatives from 46 countries. The priorities facing the Armenia-Diaspora-Artsakh trinity and the challenges were discussed and a Declaration was adopted.

The programs promoting repatriation are some of the key programs of the ministry.

The RA Ministry of Diaspora also developed the RA draft law “On Repatriation” which had been approved by the RA Government in March and has been presented to the RA National Assembly.

One of the key directions of the ministry is the reinforcement of programs and events ahead of the Armenian Genocide Centennial. The RA Ministry of Diaspora must contribute to the creation of committees ahead of the Armenian Genocide Centennial in the regions. As the minister mentioned, in 2011, adequate committees were established in all regions and they are currently active.

The use of high technologies is of great significance for consolidating Diaspora Armenians. The RA Ministry of Diaspora started publishing the “Hayern Aysor” (Armenians Today) online newspaper three years ago. The ministry also has its website at www.mindiaspora.am and has created an e-library (www.lib.am), which includes 420 instructional books, fiction, children's books, as well as books devoted to history and the Armenian Genocide. The creation of the “Virtual Museum of the Armenian Diaspora” is in the final stage.

In 2011, the ministry organized 12 teleconferences with the representatives of the Armenian communities, organizations and centers for Armenian studies in Syria, Lebanon, the Russian cities of Moscow, Pyatigorsk, Samara and Tula, Ajaria, Canada, the USA, France, Australia and Belarus.

The RA Ministry of Diaspora, the Diaspora Divisions of the institutes of Art and Literature at the National Academy of Sciences of Armenia, Yerevan State University and “Noravank” Scientific-Educational Foundation organized studies and investigations related to the history of Armenian communities and released the results in booklets.

Within the framework of the program of events dedicated to the 20th anniversary of independence of the Republic of Armenia, the ministry organized the concerts of French-Armenian singer Martin Yorgantz and famous Greek-Armenian guitarist Hagop Kolanian in Yerevan and the provinces, the concerts of RA Distinguished Artist Ruben Sahakyan in Aynchar residence of Lebanon, Germany, Romania and Switzerland, as well as the concerts of Robert Amirkhanyan and the Tsakhkazard Group in different German and French cities; the Pan-Armenian Forum of Fine Arts at the exhibition hall of the Union of Artists of Armenia and the painting exhibitions of painter Anna Shahnazaryan in Beirut, Karen Gevorgyan's master's courses for dance instructors in Krasnodar and Paris, showed support to the “Yes Em” (It's Me) International Youth Film Festival, the creation of the “Im Ani” (My Ani) documentary, as well as the illustrated book and the film “Im Hayastan” (My Armenia) devoted to the 1050th anniversary of Ani.

The ministry produced the film “3rd Anniversary of the RA Ministry of Diaspora”.

At the end of the press conference, RA Minister of Diaspora Hranush Hakobyan answered journalists' questions.

Newer PostKevork Hadjian: I believe in the power of Armenian song
Older PostPilgrimage to Chinsurah