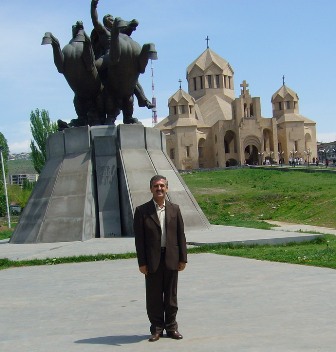 Azad-Hye, Dubai, 19 September 2006:  Ara Ashjian is an Iraqi Armenian Civil Engineer who has wide-ranging interest in the Armenian history and politics. His articles reflect the daily plight of the Iraqi Armenians, who are facing uncertain future, in a country known nowadays to be the most violent in the .

Yet Ashjian finds time and energy to contribute to several online groups and websites. Since the beginning of 2006 he launched his own blog (http://ara-ashjian.blogspot.com) where he posts his views on a variety of subjects; from the recognition of the Armenian Genocide to the presence of the Turkish troops in Lebanon; from everyday Diaspora problems to detailed travel notes taken during his recent trip to Armenia and Karabagh (April-May 2006).

Reporting from , a city with everyday hardships, he lives with the hope of a better future for all the Iraqis. But the recent developments are not encouraging at all and the long awaited peace is still considered far beyond the reach of the people. Hope is giving way to feelings of disappointment and frustration.

In a recent posting Ashjian refered to this phenomenon. “Thousands of Iraqi Armenians are looking for shelters in different corners of the world. The war has deprived their last hope for security and freedom”. According to his writings, the majority of Iraqi Armenians don?t see any future in . Many are trying to start a new life in , with the aim of reuniting with their loved ones in the near future.

Ashjian risks his life when he goes to the internet caf? to do his postings. In one of his latest messages (posted 13 September 2006 on his blog) we read the following:

“Iraqis suffer lack of public services and fuel in a country which is supposed to have the second greatest oil reserves in the world!! … We don't know when or where a car bomb or a mortar shell will miss or hit us when we come out or whether we'll return back safely to our homes or not. The way from my home to the University – where I work – witnessed many car bombs, university students were kidnapped and members of the academic staff were assassinated!! Last week, when I was making my postings to the group, the Iraqi police had closed the main road near the presidency complex of the university for four hours to check two cars being suspected to carry bombs at about 50-60 meters from my office. Yesterday, a car exploded at about 60 meters. A friend from who was chatting with me said joking. What an amazing life you are living there!!”

Despite all of these, Ashjian is determined to go on. He continues monitoring the political developments in the region. Lately he voiced concern regarding the Turkish presence in (under the pretext of international peacekeeping forces). Asking the Lebanese authorities to learn from the lessons of history and to remember the policy of starvation and annihilation implemented by the Ottomans against the local Lebanese population during World War I, Ashjian expresses hope that the Lebanese people will confront the Turkish attempts of penetrating into the region, exactly in the same way the united Iraqi forces prevented the Turks from occupying parts of North Iraq in 2003.

Armenians part of the cultural diversity of by Ara Ashjian

Photo: Ara Ashjian in front of the statue of General Antranig in (April – May 2006)