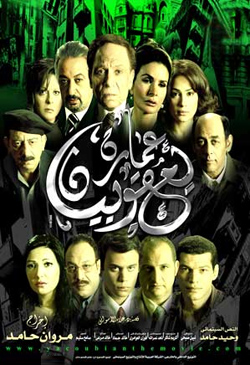 Azad-Hye, Dubai, 22 September 2006: “The ” (“Omaret Yacoubian”) is an Egyptian movie that tracks the Egyptian society over the years through the tenants of a decaying residence.

The apartment building was originally built in downtown in 1934 by a prominent Egyptian Armenian and during the first decades of its existence housed wealthy Pashas and foreign dignitaries. But after the Second World War the scene changed dramatically and the building started hosting poor workers and their families on the rooftop, mingling with the nouveau riche, thrill-seekers and ex-Pashas in the crumbling apartments. The building stands as a metaphor for contemporary . The actual building still stands at the address given in the novel: 34, , although its true appearance differs from its description in the book.

“The ” tackles subjects considered taboo in traditional Egyptian society. The movie is based on the namesake best-selling novel of Alaa Al-Aswany, with the same name. The novel was published in Arabic in 2002 and was translated into English in 2004.?The film version offers a revealing window into the secular world of a present-day Arab society (the events are shaped at about the time of the 1990 Gulf War). Poverty fuels most subplots. The son of an ex-Pasha (veteran Egyptian actor Adel Imam) no longer enjoys wealth so he surrenders his dignity in pursuit of sexual pleasures. A poor young security officer is seduced by a homosexual editor into moving nearby so he would be available for sexual services. A porter's son, who suffers humiliations over lack of money and a young girl's rejection, turns to radical Islam. A former shoe-shiner, who now owns blocks of real estate, goes into politics and marries a widow who is seeking for financial security.

The film was screened at the Berlin International Film Festival and is nominated for Oscar 2006 in the category of foreign feature films. It cost US$6 million, a record for Egyptian productions (few times more than any other Egyptian film). Director Marwan Hamed however might be obliged to shorten the 165-minute film to be eligible for the Oscar screening.

The filming began in mid 2005 with famous Egyptian actors Adel Immam, Youssra, Nour El-Sherif and Hend Sabry. It received plenty of pre-release promotion and speculation. It was released in June 2006 and is expected to play for at least 5 months in .?The movie's screenwriter Wahid Hamed (father of the Director) is 's most celebrated screenwriter. He believes that the film is a document of the present-day life in .

Before shooting the film one blog writer made the following comments: “How will they play the gay characters, and who will play those roles is beyond me. Can they really play out the Parliament corruption on film? However, with the current sexual state of the entertainment industry, I think they will play the sex parts of the novel very accurately. Overall, I really doubt that the movie will be anything like the novel. It will be a box office hit, that's for sure. All those actors in one movie, and having the same title as the novel, I think will do wonders to the tickets sales” (see http://fromcairo.blogspot.com/2005/02/famous-yacoubian-building.html)

In the novel, the was considered one of the most luxurious and prestigious apartment blocks in following its construction by Armenian businessman Hagop Yacoubian in 1934, with government ministers, wealthy manufacturers, and foreigners residing or working out of offices there. After the military-backed coup in 1952 which overthrew King Farouk and eventually resulted in the installation of Gamal Abdel Nasser as President of Egypt, many of the rich foreigners, as well as native landowners and businessmen (including Jews), who had lived at the Yacoubian fled the country. Each vacated apartment was then occupied by a military officer and his family, who were often of a more rural background and lower social caste than the previous residents.

On the roof of the ten-story building are fifty small rooms (one for each apartment), no more than two meters by two meters in area, which were originally used as storage areas and not as living quarters for human beings, but after wealthy residents began moving from downtown Cairo to suburbs such as Medinet Nasr and El Mohandiseen in the 1970's, the rooms were gradually taken over by overwhelmingly poor migrants from the Egyptian countryside, arriving in Cairo in the hopes of finding employment. The rooftop community, effectively a slum neighborhood, is symbolic of the urbanization of and of the burgeoning population growth in its large cities in recent decades, especially among the poor and working classes.


Zaki Bey el Dessouki ? a wealthy and elderly foreign-educated engineer who spends most of his time pursuing women and who maintains an office in the Yacoubian, he personifies the ruling class prior to the Revolution: cosmopolitan, cultured, western in outlook, and not particularly observant of Islam

Taha el Shazli ? the son of the building doorman, he excelled in school and hoped to be admitted to the Police Academy but found that his father's profession, considered too lowly by the generals conducting his character interview, was an obstacle to admission; disaffected, he enrolls at the University and eventually joins a militant Islamist organization modeled upon the Jamaa Islamya

Buthayna el Sayed ? initially Taha's childhood sweetheart, she is forced to find a job to help support her family after her father dies and is disillusioned to find that her male employer expects sexual favors from her and her female coworkers in exchange for additional money and gifts on the side, and that her mother expects her to preserve her virginity while not refusing her boss's sexual advances outright; embittered, she eventually comes to use her beauty as a tool to advance her own interests but finds herself falling in love with Zaki Bey el Dessouki, whom she'd been planning with Malak to swindle out of his apartment

Malak ? a shirtmaker and petty schemer seeking to open a shop on the Yacoubian's roof and then to insinuate himself into one of the more posh apartments downstairs

Hatim Rasheed ? the son of an Egyptian father who was a noted legal scholar and a French mother, he is the editor of Le Caire, a French language daily newspaper; more attention is paid to his private life, for he is a fairly open homosexual in a society which either looks the other way or openly condemns such behavior and inclinations

Hagg Muhammad Azzam ? one of Egypt's wealthiest men and a migrant to Cairo from the countryside, in the space of thirty years he has gone from shoe shiner to self-made millionaire; he seeks an acceptable and legal outlet for his (temporarily) resurgent libido in a secret, second marriage to an attractive young widow, and also realizes his goal of serving in the People's Assembly (Parliament), but comes face to face with the enormous corruption, graft, and bribery of contemporary Egyptian politics.

Distributed by Good News Group (In )

– Interestingly, Al Aswany is a dentist by profession, whose first office was in the real .

– The film was scheduled to open during that year's festivities but was pushed back to allow time to premiere at the Berlin Film Festivel and to allow the film to build up interest surrounding it.

– Receiving the Adults Only seal from the board of censors in , the film debuted on June 25th to massive box office returns of over LE 6,000,000 in its first week, according to Al Ahram Daily.