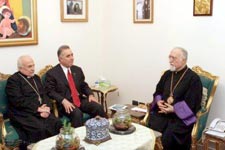 Under the high patronage of His Beatitude Nerses Bedros XIX, Catholicos Patriarch of Cilicia for the Armenian Catholics, on Sunday, the 1st of April, 2007, at 7:00 pm, Mr. Harut Sassounian, President of the United Armenian Fund, Vice-Chairman of the Lincy Foundation, and publisher of the California Courier, was decorated with the “St. Mesrob Mashdots” Patriarchal Medal of Honor during a special ceremony held in the “Araradian” theatre of the Armenian Catholic Association in Geitawi, Ashrafieh, Lebanon. The event was organized by the Armenian Catholic Schools Principals' Committee.

Among the honorable guests of the event were: the representative of the Holy See of Cilicia, His Grace Bishop Nareg Alemezian; the representative of the Armenian Evangelical Church, Rev. Soghomon Kilaghbian; the President of Haigazian University, Rev. Paul Haidostian; the High Priest of the Patriarchal Clergy Institute of Bzommar, Father Kevork Yeghiayan; the editor-in-chief of “Massis” weekly, Father Antranig Granian; as well as Armenia's Ambassador in Lebanon, Vahan Der-Ghevontian; the Consul of Benin, Ara Vanlian; and many other religious and educational representatives of the Armenian Community in Lebanon.

The opening remarks were delivered by the Principal of St. Hrimpsimiants School, Sister Armin? Magarosian. She emphasized that Armenian schools, being the most important element in the struggle to preserve Armenians in the diaspora, are always in need of support, protection and motivation like the one brought by Mr. Sassounian. She then reflected upon his ten-day visit of Lebanon in November, 2006, that showed his deep love, appreciation and belief in Armenian schools.


Her remarks were followed by a brief biographical slide show of Mr. Sassounian, prepared for this special occasion, under the title of “Harut Sassounian, beloved and unforgettable.”

The ceremonial decoration started after the artistic program. Father Ghevont Kendirjian read the Patriarchal Decree and His Beatitude Nerses Bedros XIX honored Mr. Sassounian with the “St. Mesrob Mashdots” Patriarchal Medal. His Beatitude emphasized that all who care for and preserve Armenian national, cultural and traditional values deserve immense respect and appreciation. He also stated that Mr. Sassounian helped realize the major contribution that helped the Armenian Lebanese schools during the very difficult conditions of war in Lebanon. He ended by saying that such celebrations are addressed not only to Mr. Sassounian, but also to all those like him, as an expression of our gratitude.


At the end of the ceremony, Mr. Sassounian was invited to address the audience. He said: “I sincerely think that I have only done my share of responsibility for my beloved people, and there still remains a lot to accomplish.”

The event concluded with a lavish reception.