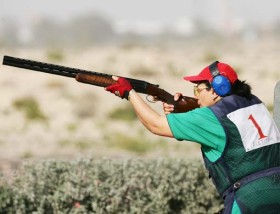 Dubai: Overnight leader Yerjanik Avetisian fumbled a bit, but held her nerves to clinch the top spot in the women's skeet at the Dubai Shooting Championships yesterday.

At the impressive Jebel Ali International Shooting Club range, victory did not come easy for the stocky Russian as she slipped up a bit on the penultimate station missing a target.

However, she did enough to recoup and hold her nerve in the shoot-off against Germany's Christine Brinker.

“I think I lost a bit of concentration towards the end,” Avetisian told Gulf News after receiving her cheque for Dh75,000 from Hakeem Al Bannai of sponsors ETA Ascon.

Coming in third was Louisa Theofanous of Cyprus, while Svetlana Demina of Russia was placed fourth.

The petite Danka Bartekova of Slovakia, who was in contention for a top three finish, fumbled in the final and had to be content with the fifth spot following a shoot-off against Albina Shakirova of Russia.

“I am very happy to win here as this was among the strongest fields I have contested against,” Avetisian told Gulf News.

“I have been a bit rusty as we did not have too much practice during the winter. I am happy with my second position,” said Christine Brinker of Germany. 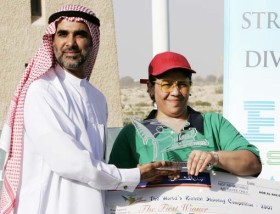 “I did not expect such high scores from the women due to the winter months. I knew the fight would be between the Russians and the German,” said championship patron Shaikh Ahmad Hasher Bin Mohammad Al Maktoum.

“We have our plans to make this into an annual event,” added Al Bannai of sponsors ETA Ascon.