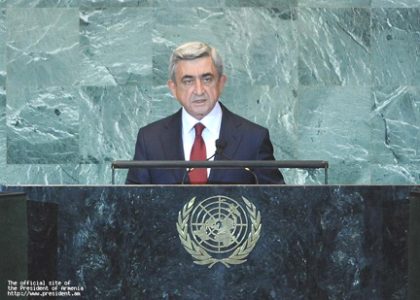 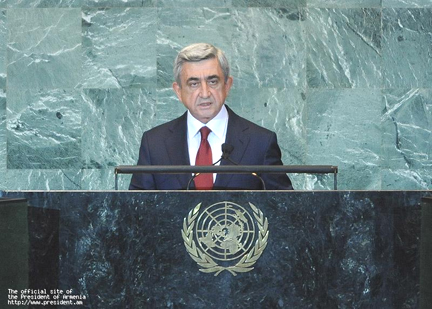 Below is the translated text of the President?s remarks provided by the presidential press service.

Firstly, I would like to thank and wish much success to Mr. Nassir Abdulaziz al Nasser, the President of the 66th session of the UN General Assembly, and thank Mr. Deiss of Switzerland for his leadership during the 65th session.

I would also like to take this opportunity to once again congratulate the UN Secretary-General Ban Ki-moon for his second term in office.

I wish to recognize the important choice of the general debate theme for this session and highlight the role of mediation in the settlement of disputes by peaceful means and as a means of preventing the resumption of hostilities.

We highly appreciate the mediation efforts of global and regional structures and organizations in various parts of the world in preserving peace and security and in conflict settlement through peaceful negotiations.

It is particularly worth mentioning the engagement of regional organizations that have built-up an enormous experience in mediation and have an in-depth knowledge of the political, cultural, and military realities on the ground. The success of mediation hinges, among other things, upon the articulation of a clearly-defined mandate. A case in point for us is the mission of the OSCE Minsk Group in the settlement of the Nagorno-Karabakh conflict.

Another key factor worth highlighting here is the mediators? role in preventing conflict escalation and the resumption of hostilities. This aspect of mediation is sometimes overlooked, yet it is of no less importance to international peace and stability than finding a solution to a contentious matter.

Three years ago, when I had the honor to speak from this rostrum, I stated that the time has come for seriously considering the exercise of the people?s right to self-determination in the 21st century. We are today witnessing new cases of the exercise of this inalienable right.

In this context, I would like to congratulate the newly-elected 193rd member of the United Nations Organization, the Republic of South Sudan. Its path to having a place in this august hall has been long and difficult, but the people of South Sudan, through the free expression of will, exercised their right to live sovereignly and independently, thus crossing the path that many of the UN member states present here today have crossed.

The people of Nagorno-Karabakh made the same choice two decades ago by exercising their right to self-determination, by withstanding the war unleashed by Azerbaijan, and surviving bloodshed to earn their right to live in freedom.

The Nagorno-Karabakh conflict settlement talks are continuing with the mediation of the OSCE Minsk Group co-chairs. We are grateful to the co-chair countries and their leaders for their mediation efforts. However, the mediators cannot reach an agreement in place of the negotiating parties.

Azerbaijan?s utter unwillingness to reach an agreement and its ?everything or war? position have stalled progress in the peace talks. Despite the expectations and the high-level advice from the international community, Azerbaijan took yet another step back during the last meeting in Kazan by rejecting the previously elaborated arrangement and trying, in fact, to break down the negotiation process.

Baku has turned armenophobia into state propaganda, at a level that is far beyond dangerous. It is not only our assessment; the alarm has also been sounded by international structures specializing in combating racism and intolerance. Even more dangerously, armenophobic ideas are spread among the young Azerbaijani generation, imperiling the future of peaceful coexistence.

By denying and destroying all that is Armenian, Baku stubbornly continues to disseminate false accusations against Armenia, Nagorno-Karabakh, and the Armenians at all levels everywhere, including here, within the framework of the UN. The Azerbaijani propaganda machine continues regularly to overwhelm the international community and the domestic audience with horrendous lies about the so-called ?Armenian brutality? and the killings of children. These stories are fabricated and disseminated using a trite yet painful logic, whereby their authors believe that some people out there will rise to the bait of this black PR against Armenia, and it will thus serve a purpose.

In recent years, owing to the efforts of the Minsk Group co-chair countries, particularly the direct mediation by the President of the Russian Federation, a number of documents have been signed, including the Meindorf, Astrakhan, and Sochi Declarations, which have stressed the need to strengthen the confidence-building measures between the parties. The signature of the President of Azerbaijan also stands on those documents.

Azerbaijan, however, continues to turn down the repeated proposals by the international community concerning agreement on the non-use of force and strengthening the confidence-building measures.

Moreover, the belligerent rhetoric and war threats uttered by Azerbaijan have intensified and ceasefire violations have grown more frequent, continuing to deprive of life innocent civilians. All of this is orchestrated from the highest state level.

The dangerous rise in manifestations of armenophobia not only fails to contribute to an atmosphere of trust in the region, but also leads to questions about Azerbaijan?s understanding of the goals of the United Nations to practice tolerance and live together in peace with one another as good neighbors. Aspiring for membership in the Security Council of the UN with such an understanding is impermissible and even dangerous.

In the frameworks of this Assembly, alongside debates on some of the most vital and urgent issues of our time, a high-level meeting took place yesterday on the 10th anniversary of the Durban Declaration, which reiterated the urgent need to eliminate racism, racial discrimination, xenophobia and all forms of intolerance.

Unfortunately, such intolerance is known to us, Armenians, not only through the examples I mentioned earlier. As a nation that has survived a genocide, the most extreme form of racism and xenophobia, we are morally obliged to act for the prevention of future genocides.

The elimination of racism and xenophobia and the inculcation of tolerance can become a truly effective mechanism if accompanied with clear prescription of liability. Impunity and avoidance of liability give birth to yet new crimes. Hence, it is incumbent upon us in the international community to identify and denounce without delay any expression of intolerance, but especially its extreme forms.

The Genocide of the Armenians perpetrated in the Ottoman Empire has been recognized and condemned by numerous countries, parliaments, international organizations, and genocide scholars? community. Unfortunately, the same does not hold true for the Republic of Turkey, which continues to engage in a policy of denying this atrocious crime committed against humanity.

We unequivocally welcome the clear position adopted by the international community in precluding any possibility of immunity or pardon for perpetrators of genocide or other crimes against humanity.

Without recognition and condemnation, it will be impossible to develop and implement effective mechanisms of prevention, which is one of the UN?s priorities. Armenia will contribute its most to the recognition, punishment, and prevention of genocides.

These references to the Armenian Genocide lead me to recall another important celebration marked this year: the 150th birthday of Fridtjof Nansen, the first High Commissioner for Refugees. In the most difficult period for my nation, the great humanist rendered priceless support to the survival of the homeland-deprived fragments of the Armenians fleeing from the Genocide. Holders of the Nansen passports settled in various countries of the world, reaching as far as South America. They rose to their feet and partook in the development of the countries and peoples hosting them.

I believe that justice and the equality of rights between states have become standards in international relations owing to such powerful individuals who promoted their vision of morality in that cruel world of the ?realpolitik.?

Speaking from this rostrum in 2008, I had expressed hope that the Armenia-Turkey normalization process initiated by us and the establishment of diplomatic relations and the opening of the borders closed by Turkey, trespassing international law, would become the first steps in enabling us to start a dialogue and overcoming the air of mistrust, suspicion, and uncertainty existing between us. Although our initiative was commended and widely supported by the international community, Turkey has in all ways possible aborted the ratification and implementation of the protocols we initialed in 2009.

Today, on the eve of the Rio Summit on Sustainable Development, political will must be demonstrated to honor the international commitments in order to turn the South Caucasus into a region of cooperation and prosperity.

The correlation between security and development is not an abstract theory for our region where economic cooperation and deeper integration with the global economy are hindered by unlawful blockades and the blockage of regional integration projects.

These attitudes, alongside the fueling of an arms race, not only are dangerous for the peoples of the region, but they also continue to absorb the resources direly needed for sustainable development.

The time has come for the leaders of the countries in our region to try to stand above the dictates of a narrow political agenda and to move towards solutions that are aimed at a peaceful and prosperous future for generations to come.

I want to believe that, not in the distant future, our region will be perceived as a solid and firm bridge uniting civilizations, rather than as a dividing line.

Two days ago, the Republic of Armenia celebrated the 20th anniversary of its independence. In September 1991, Armenia restored its independence, realizing the dream of the Armenian people and reuniting with the Family of Nations.

In the realm of history, 20 years may seem like a short period, but it has served for the present generation as a period of great change, construction of independent statehood, and a renewed perception of their role and place in the world. I wish to take the opportunity from this esteemed rostrum to express my gratitude to all the states, peoples, and individuals that have supported us in these 20 years of development and construction of statehood.

Freedom, peace, and democracy are our choice, and we are committed to this path. We are proud of our achievements today. In two decades, the Republic of Armenia has implemented a wide-scale program of constructing statehood. Much has been done in the fields of democratization, human rights and economic reforms, the establishment of the rule of law and liberal economy. We have many achievements, but much still remains to be done. Above all, we are convinced that we are on the right path, a path that is irreversible.

Exactly a decade ago, New York, the city which is home to the United Nations Organization, experienced one of the worst atrocities in the history of mankind, the 9/11 terrorist attacks. Armenia unconditionally supports and actively contributes to the international community?s counter-terrorism efforts and all of the UN?s initiatives in this area. We are doing and will continue to do our best for the world to be a safer and more peaceful place.

We stand ready, to the best of our abilities, to contribute to global security and respond to global threats, be it through peace-keeping missions, elimination of the consequences of natural disasters, environmental protection, or the fight against terrorism, racism, and intolerance. Over the years, we have proven our aspirations and determination with deeds, and we stand ready to continue doing the same.