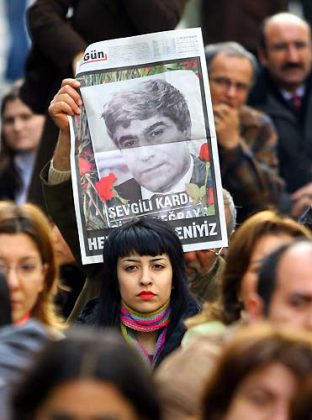 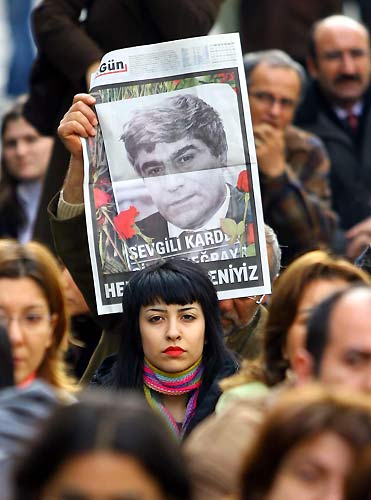 Hrant Dink was a journalist who was trying to say something, but whose words were often not heard due to the commotion that surrounded him. The Agos newspaper, of which he was the general editor, has let us know of the wish that funeral participants not yell any slogans at the proceedings for Dink. Who knows, maybe they want us just to think quietly while walking behind his coffin.

For example, perhaps we could meditate on why it is that in his passport, his name is written “Firat” rather than “Hrant.” (The former being a Turkish name, while the latter is clearly Armenian.) Or maybe it would serve us to think about why one of his brothers was referred to in one of yesterday's newspapers as “Orhan,” when in fact his two brothers are called “Hosrof” and “Yervant.” (Same thing; the first name is Turkish, while the latter two are Armenian.) Yes, it would behoove us to think about these things.

In yesterday's Radikal newspaper, a Turkish citizen of Armenian extraction was talking about his youth, noting “When I was a child, when my mother called me in the park, she would use my Turkish name.” I wonder why?

Other newspaper articles, examining Dink's life, have noted that despite the fact that he scored high points as a soldier, he was never made into a “sargeant” as a young man. One newspaper even noted that Hrant Dink had cried because of this. But why was it that Hrant was never seen as worthy for a pair of epaulets?

Yes, the newspapers and television programs have revealed to us all in the wake of Hrant Dink's death that he was raised in an Armenian charity school, and even met his wife there as a youth. And many of us read these details of his life story with wet eyes. But I am sure that as we read these details, very few of us recalled that it was the Turkish Republic which, at one point, stopped the donations of money from Armenian wills which were the only funding for these charity schools, and that the charity schools then had to shut down due to lack of funding.

Yes, there are many, many things about which to think as we continue crying about Hrant Dink's death.

Photo: At the funeral of Hrant Dink in Istanbul, 23 January 2007