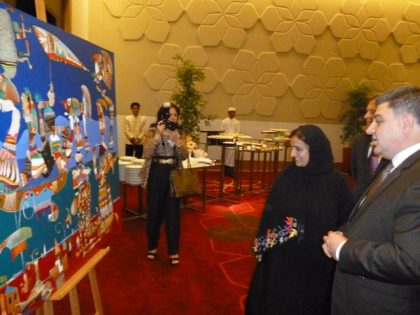 This days was all about Armenia; the history of a country that has passed many struggles and has lived enormous losses and casualties, yet owns a young and powerful spirit with the vision to always move on.

Like a child growing up in front of proud parents eyes, Armenia has passed through a tremendous path of development to reach where it is now. A rapid developing country, with a bright future and enthusiastic people filled with hope for tomorrow, this is who we are. We are Armenia.

The reception of this years? Armenian Independence Day took place in Crowne Plaza Yas Island. The Armenian ambiance was kept throughout the entire event. Music, played by the jazz trio with Vahagn Hayrapetyan on keyboards, Armen Hyusnunts on saxophone and Vardan Grigoryan, on traditional Armenian duduk, kept the audience altogether in a cheerful and emotional state of mind. The buffet was custom designed with a mix of international dishes, as well as many ethnic Armenian dishes, that were prepared by the skillful Lebanese chef, who happened to grow up with Armenians himself. Many food items were brought from Armenia such as cheese, dried fruit, a selection of fresh fruit, as well as the famous bastourma and soujoukh. Throughout the evening, Armenian white and red wine, along with brandy kept the celebration mood going. To add to the colors of the festive mood, an exhibition by famous contemporary Armenian artist Gabriel Manoukian (Gapo) took place simultaneous to the event. The official number of attendees was 420 people.

Guests included many Ambassadors and Foreign Representatives, as well as Her Excellency Sheikha Lubna bint Khalid Al Qasimi, Minister of Foreign Trade of the United Arab Emirates who is also a strong supporter of Armenia and its development.

On the occasion of the 20th Anniversary of the Independence of the Republic of Armenia, for their considerable contribution to the development and proclamation of the Armenian culture, by the Order of the Minister of Culture of Armenia Mr. Abdulla Salim Al Amri, Director of Culture and Arts Institute of Abu Dhabi Authority for Culture & Heritage, has been awarded with the Gold Medal of the Ministry of Culture of the Republic of Armenia, while Abu Dhabi Authority of Culture and Heritage has been awarded with the Certificate of Honor.

Newer PostArmenia's participation in Alexandria symposium
Older PostEdward Ayvazyan: We should accept both the positive and negative facts about Georgia