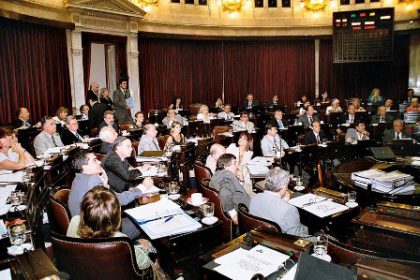 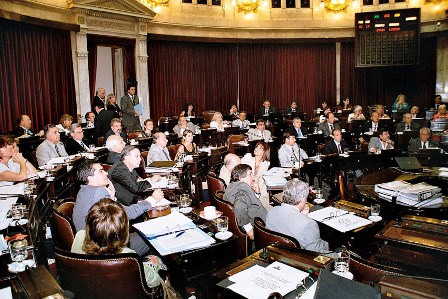 On 13th December 2006 the Argentinean Senate unanimously adopted a law, according to which April 24 will be marked as “Day of action for the tolerance and the respect between the people” in Argentine.?

57 Senators attending the voting session approved the Law based on a Resolution adopted earlier by the lower house of 's parliament, recognizing the 1915-1918 mass killings and deportations of the Armenians in the Ottoman Turkey as genocide.

Present at the voting, Ambassador of Armenia Vladimir Karmirshalyan declared: “I share the joy and the pride with the present people, the Armenian Community and . showed, once again, its devotion to the cause of the human rights and its serious comprehension of the aspirations of the Armenian people”. The law should be ratified soon by the Argentinean president.

As soon as the final results were announced, Armenians present at this historical vote in the Senate Hall celebrated with a barrage of applauds. ARF Bureau member Mario Nalbandian and his colleagues who for many years struggled to achieve this (through the efforts of the ?Armenian Cause Committee in ?) received the congratulations of the Senators and other leading politicians of the Argentinean society. 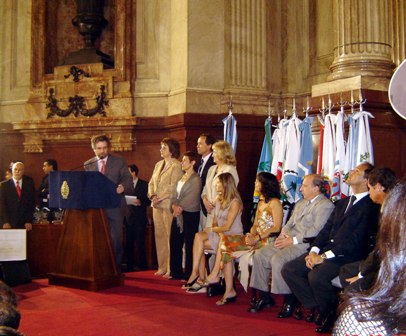 On the occasion of the 58th anniversary of the Human Rights Declaration the Argentinean Senate honored on 12th December 2006 several activists amongst them Pedro Mouratian (the former Chairman of the “Armenian Cause Committee in South America”), who was praised for his long term commitment to the progress of human rights issues.

During the award granting ceremony Argentinean Vice President Daniel Scioli made reference to the Armenians by the following words:

“I would like to express my thoughts regarding the Armenian community, which has been victim of persecutions and Genocide. Argentine, a country that has been always a mosaic of peoples, has opened its arms to the sons of the Armenian nation. By honoring them today we express our respect to all the immigrants who reached our shores, seeking prosperity. And since we wish that Argentine lives in unity, peace and without discrimination, we pay our tribute to the Armenian community?

2- Pedro Mouratian delivers a speech in the presence of Vice President of Argentine Daniel Scioli during award ceremony of human rights activists.