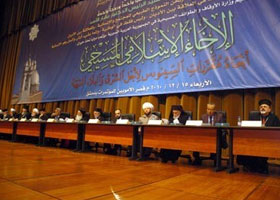 ANTELIAS, LEBANON ? Recently the Minister of Religious Affairs of Syria and the Greek Catholic Patriarchate organized a meeting to discuss the recent The Vatican Synod on the Middle East and its official message. The meeting was held in Damascus with the participation of around one thousand persons.

Archbishop Sebouh Sarkissian greeted the conference and welcomed the initiative in the name of Catholicos Aram I, and hoped that the meeting would give a new impulse to Christian-Muslim dialogue. He then continued, ?His Holiness Aram I continually reminds dialogue partners of the urgency of cooperation along with dialogue meetings?. The Archbishop then described the commitment of the Catholicosate of Cilicia to interreligious dialogue, and said, ?During the fifteen years when His Holiness Aram I was Moderator of the World Council of Churches, and currently as a President of the Middle East Council of Churches, he persistently reminds the ecumenical community of the importance of existential dialogue.? Archbishop Sebouh concluded his speech by describing the Armenian diaspora and the existential dialogue of Armenians with their host neighbours, particularly in the Middle East for many centuries as a vivid example of this commitment of the Catholicosate.

DAMASCUS- The Islamic-Christian Fraternity Conference, held by the Ministry of Endowments and the Syrian Churches, started its activities on Wednesday. Delegations from over thirty countries participate in the conference, organized at Damascus-based Umayyad Palace.

Minister of Islamic Endowments (Awkaf) Abdel Sattar al-Sayyed said the Islamic-Christian fraternity in Syria is a historical fact and social need that the citizens have lived throughout history.

He added that the Islamic and Christian messages laid the bases for justice and prohibited all forms of injustice, adding that Islam and Christianity agree on a core definition of justice and rights in all social, political and economic fields; which states that justice consists in rendering to every human his due if he is entitled to it.

Minister al-Sayyed said the Arab civilization, built by the Muslims and Christians, is a pioneering cultural experience in tolerance, which qualified it to play its role as a unique example of cultural dialogue.

His Beatitude Gregorios III Laham Patriarch of Antioch and of All the East, of Alexandria and of Jerusalem of the Melkite Greek Catholic Church, said that holding a conference of this national, religious, social, Arab and global scale in Damascus proves its spiritual values and the respect that all its citizens enjoy. He stressed the importance of uniting efforts and building a true human culture based on amity and respect among Christians and Muslims and accepting others in order to protect the Arab world.

For his part, Grand Mufti of the Republic Ahmad Badreddin Hassoun said that the conference aims at clarifying the true image of Islam and its noble meanings through Islamic-Christian fraternity. Hassoun called on Muslim and Christian scholars to unite efforts to raise awareness regarding the conspiracies being plotted against the region and to spread the culture of amity, peace and tolerance rather than religious extremism.

In turn, His Beatitude Patriarch Ignatius IV Hazim of Antioch and All East for the Greek Orthodox said that this conference is an important event that embodies the way in life in Syria across history. He added that there are those who commit crimes in the name of religion, and that religions are exempt from those who do as since all religions call for amity, peace and respecting humanity.

For his part, His Beatitude Patriarch Ignatius Zakka I Iwas of Antioch and All the East for the Syriac Orthodox and Supreme Head of the Universal Syriac Orthodox Church said that this conference is another opportunity for gathering and bolstering national unity, further fortifying the wall protecting Syria and all its children of various faiths, creeds and cultures.

The participants said that the conference is considered to be a positive step towards consolidating the culture of co-existence between Muslims and Christians, thus leading to the creation of a world where values of justice, cooperation, respect and right are dominant. They said that the East is the source of civilizations and the cradle of monotheist religions, and that Syria has a distinguished place in the hearts of Christians and Muslims, noting that many popes and saints came from Syria, such as St. Maroun the founder of the Maronite church.

The participants voiced their support of the Palestinian right to return, calling on national agencies to assist the Palestinians to restore their usurped lands and demanding that the international order distinguish between terrorism and just resistance, affirming that the Arab-Israeli conflict isn't a conflict between religion.

The participants welcomed in their recommendations the call made by the Synod for the Middle East for Islamic-Christian fraternity and coexistence and abandoning extremism, violence, terrorism persecution and exploitation. They also lauded the Synod's calls for establishing just peace in the region, applying the UN Security Council resolutions, and taking steps to end the occupation of Arab lands. The recommendations added that the Synod's affirmation of the importance of the Arabic language as an official language at the Synod and its recommendation for using it in the Vatican is an important step towards cooperation between Arab and Western Christianity.