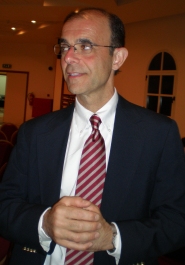 Joseph E. Malikian, Ph.D. presented archival photographs of the Armenians in the and the Armenian orphans from the Genocide (1915-1923)

In the evening of 9 June 2007, Joseph (Joe) Malikian gave a power point presentation (in English) in the Community Hall in Sharjah, UAE, in front of an audience of 40 persons. The event was organized by the newly formed Council of the Armenian Community in the Northern Emirates. Mousheg Bedirian, Chairman of the Council, welcomed the guest and presenting a brief biography, highlighting his career and medical background. Many interesting questions were asked at the end of the presentation, some in the form of comments and follow-ups.

Malikian is a clinical psychologist in practice in with an interest in archival photographs from the Ottoman period.  He is in the process of working on a book which will be a photo essay / anthology of the people of the . This project encompasses many wonderful photographs from well known photographers from the period 1865-1920s as well as graphic descriptions from the travelers, missionaries, ambassadors, etc. reflecting the characteristics of the people and the strife that existed between them.

Malikian?s work is closely related to the “Project Save Armenian Photograph Archives”, which was founded by Ruth Thomasian in in 1975. The aim of the project is to preserve, protect and promote Armenian history through photographs (see Additional Reading below). According to him, this topic has received much attention recently in the media especially in relation with the efforts for obtaining recognition of the Armenian Genocide.

Malikian received very positive feedback of his visual representation (150 plus slides) of a story depicting great sadness but also reflecting hope, perseverance and survival, as well as a story about an unprecedented humanitarian relief effort by the Near East Relief at the turn of the 20th century. The attendants seemed to be captivated by the images and intrigued by the impressive campaign and efforts that saved the lives and rehabilitated thousands upon thousands of Armenians and other ethnic groups targeted by the Ottoman government. Particularly impressive were the photos taken from different orphanages (such as the famous one in Alexandropol, in present-day Gyumri). Other examples are refugee camp, orphanages based in such as in , Corfu and , vocational and training school in Antelias, where the present day Catholicosate of Cilicia premises are built, etc).

The visual presentation was divided into certain categories with descriptive titles (men, women, children, wedding photos, funeral photos, family photos, church and educational photos, etc.). Some of the photos revealed the contrast between the urban society in and the remaining Armenian society in the countryside. Some well known locations paraded in the photos (Kharpert, Mezreh, Husseinik, etc. from )

Malikian showed also slides related to humanitarian relief campaign organized in the United States of America during and after the Genocide of 1915-1923, which resulted in raising of about 20 million dollars (a remarkable sum for that time). He showed several advertisement samples as appeared in the newspapers. Many photos were found in the possession of families who used to live in the Ottoman Empire but whose descendants continued their life in the .


Dr. Joseph E. Malikian can be reached at

Project SAVE Armenian Photograph Archives is the premier archive of Armenian photographs in the . Headquartered in , Project SAVE's mission is to collect, document, preserve, and present the historic and modern photographic record of Armenians and Armenian heritage.

Founded by Ruth Thomasian in 1975, Project SAVE Archives' extensive and diverse collection of more than 25,000 photographs, as well as its growing library of oral history audio tapes, depict all aspects of Armenian life in the homeland and Diaspora, from the 1860s to the present day.

Project SAVE strives to increase knowledge of Armenian culture and heritage by encouraging the use of its collection of photographs by the widest possible audience. 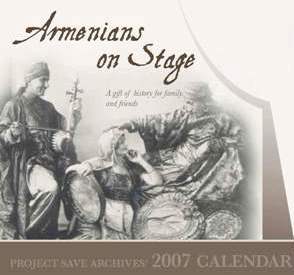