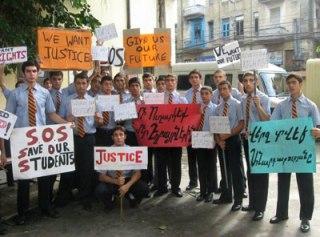 By “The Telegraph” (Kolkata) staff reporter

Students who had gone on hunger strike at the Armenian College and Philanthropic Academy (ACPA) to protest the alleged highhandedness of the authorities are being sent home to Armenia, sources said on Thursday (05 August 2010).

The number of students being sent back is uncertain. Neither the boys nor the authorities were available for comment on Thursday. The only confirmation was a Facebook post by one of the boys that says: ?I hate to tell you, but I am going back to Armenia.?

Of the 80 students staying on the Free School Street campus, 35 had started the hunger strike on Monday (02 August 2010). The boys had alleged that they were being forced to study in ?second-rate? institutions. The college runs a free school for Armenian children and also funds the college education of students from the community.

On Tuesday (03 August 2010) evening, the Armenian boys had withdrawn the strike after they heard that a representative of the Supreme Patriarch and Catholicos of All Armenians, His Holiness Karekin II, was coming to Calcutta to look into the matter. One of the boys had then written on his Facebook wall that the authorities had promised not to send them back to Armenia.

Many are apprehensive about what awaits the boys in their home country. ?They are very bright and have no future in Armenia. I?m afraid that once they return they will be made to join the army and sent to war,? said an Armenian in the city.

An ex-professor of a reputable city college said: ?I have friends in Armenia who have been telling me to do something about their sons here. They want their children to finish their education in India and take up civilian jobs.?