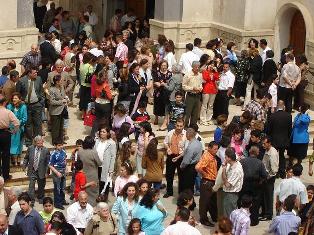 The ethnic Armenian community is one of the smallest in Iraq. It is not involved in the country's political life and is doing its best to survive the country's postwar hardships. The community has learned the art of survival and keeps a low profile amid the strife engulfing Iraq's other ethnic and religious groups. Radio Freek Europe / Radio Liberty's (RFE/RL) correspondent Valentinas Mite visited with members of the ethnic Armenian community in Baghdad and filed this report.

The Armenian Apostolic Church in Baghdad's Al-Jadirya district is full of worshippers on a recent Friday morning. The faithful pray to God to bring them peace and security and to give them strength to survive these difficult times.

Nareg Ishkhanian is a pastor at the church. He tells RFE/RL that the Armenian community in Iraq is small and spread across the country.

Armenians began arriving in Iraq several centuries ago from Iran, first settling in the south of the country and gradually moving to the capital, Baghdad. The biggest wave came at the start of the 20th century when ethnic Armenians fled Turkey after a massacre by Turkish soldiers in the final years of the Ottoman Empire.

Now, many ethnic Armenians in Iraq work as — among other professions — merchants, doctors, engineers, goldsmiths, and photographers. The tiny Christian community is not involved in Iraqi politics.

Says Ishkhanian: “We, as a small community, agree with everything, and we say to everybody, 'Salam Alaikum' (Peace be upon you).”

He says Armenians do not suffer from sectarian problems in predominately Muslim Iraq. However, they suffered under the regime of Saddam Hussein, as he says all Iraqis did.

Two decades ago, Karabed Agoub Gidigian — who is in his 80s — was one of the richest traders in Baghdad. His company imported timber, plastics, and clothing. In 1992, after the regime ran out of money after the first Gulf War, Gidigian says he was ordered to give all of the money he had in his foreign accounts to the Hussein government. When he refused, he says he was tortured and that most of his company's assets were confiscated. Gidigian says he is too afraid and too old now to start everything anew.

Making even one rich man poor is a blow to such a small community. However, behind the low profile the community keeps there is a variety of activity. Ishkhanian says the Armenians in Baghdad have four cultural and sport clubs. But he says such activities as singing folk songs and dancing or theater performances have temporarily stopped because of security concerns. Other activities — such as teaching the Armenian language — have never stopped. Ishkhanian says every Armenian in Iraq learns the native language from early childhood.

He notes that Armenia itself offers little assistance to the Iraqi community. The community hopes to receive aid from Yerevan, but nothing is available at the moment. “We had good contacts with Armenia. [Armenia] had an embassy in Baghdad, and they left in March 2003. Until now, they are not back. And the house of the embassy belongs to the Armenian church. We gave it [to Yerevan] free of charge.”

Ishkhanian says it is a pity the ethnic Armenian community in Iraq does not enjoy more support from Yerevan. He says some financial support trickles in from Armenians living in the West — in the United States, Britain, or Germany.

Ishkhanian says the main achievement of the ethnic Armenian community in Iraq is that it has managed to keep its language alive and maintain strong solidarity. He says the community never leaves its members in trouble.

Gladys Boghossian is the president of the Armenian Women's Association for the Relief of the Poor in Iraq, an organization that works closely with the Armenian Apostolic Church. The association was founded in 1927.

Boghossian says the numbers of those in need in Iraq is greater now than ever before: “Now, we have too much work to do because of this war. We started to give them food and medical treatment.” She says the association is taking care of some 300 families — almost 1,000 people. Among the benefits, Boghossian notes that every poor Armenian can get free medicine in pharmacies serving the community.

“We are a very poor family,” she said. “The church has provided work for my husband. He works in the church. Not only me — any person who asks the church for help is given help. The church never hesitates to give help.”

On the surface, life in the ethnic Armenian community in postwar Iraq seems fairly comfortable. However, some members of the community — speaking on condition of anonymity — say it is only a facade that hides deep divisions.

They say some Armenians cooperated with the former regime and lost trust among the people but remain in leading positions. Armenians in Iraq also bitterly accuse their leaders of corruption, especially in dealing with financial help coming from abroad.

Photo: The public in the church yard after the holy ceremony. Defying many difficulties and security problems, a large number of the Armenians of Baghdad participated in Holy Week services and Easter celebrations. Attached some pictures of Easter Celebration at St. Gregory the Illuminator Cathedral near Tayaran Square in Baghdad (8th April 2007). Photo provided by Ara Ashjian – Baghdad.