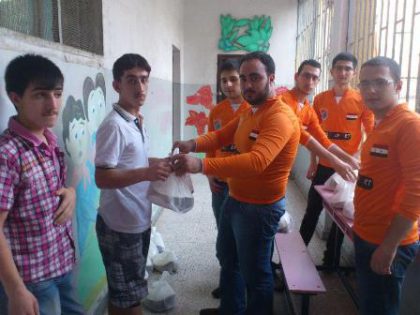 
Nanore Barsoumian's article explains the dilemma the Syrian Armenians face: Should they stay and face the difficulties or should they immigrate? What are the prospects of their survival in the troubled political scene of Syria? Is the option of repatriation to Armenia a viable one, having in mind the current economic instability of the country? Can the Armenians of Syria immigrate without aid from Armenia or the Armenian communities worldwide? Are they willing to part from the country where they have been living for the last 100 years?

What can they do in front of the escalating events in the country? How can they keep themselves intact without becoming a target by this or that side? Is it possible to keep neutrality in a society that has been extremely polarized? These are some of the questions that shape the Syrian Armenian concerns.

While existential problems are discussed, Syrian Armenian youth in the Armenian populated neighborhood of Aleppo (Midan) are involved in cleaning the garbage accumulated in the streets as a result of the Municipality's inability to perform its work.

The situation in the city of Aleppo is grave. Refugees are moving from one part of the city to another fleeing fire and bombardment. The Government and opposition troops are engaged in the strongest clashes the city has witnessed in its contemporary history. Schools and other institutions are hosting increasing number of fleeing population. A group of Armenian youth has volunteered to provide assistance to the refugees coming from other parts of the city (see photo).

The changes came as more than 3.000 Syrian Armenians applied for citizenship since the beginning of the year, thus causing great pressure at the Passports and Immigration Department in Yerevan.

Arrangements has been made for Syrian Armenians who have plans for settling down in Armenia (either temporarily or forever) in order to cater for the educational needs of their children. Three schools are designated where students can enroll.

“The State is obligated to create all the opportunities to offer them education services. Everything must be done to create favorable conditions for our compatriots,” said Armen Ashotyan, Minister of Education and Science.

Armavia Airlines promised to lower the ticket prices on its


Aleppo – Yerevan – Aleppo flights, but thus far it has not taken any measures. There is fear that the flights would be cancelled altogether, as there are not enough travelers on the outgoing Yerevan – Aleppo segment.


The repatriation of the Syrian Armenians has been a hot topic in the Armenian media, as the biggest Armenian traditional party Dashanktsutyun (ARF) voiced against encouraging the repatriation and in favor of Armenians staying in Syria.

“The Syrian Armenians should adopt, as a community, an attitude that would not let them become a target”, said ARF Bureau Representative Hrant Markarian.

Nevertheless, there are about 100 families who have chosen to come to Armenia since March this year, trying to stay away from what is considered to be a conflict stricken country. They are exploring the prospect of starting a new life in Armenia (Watch the story of a repatriated family on youtube at the end of this report).

In the last two days communication (telephone and internet) has been very weak with Aleppo. All mobile lines were cut off and some land lines were functioning with difficulty. Internet is almost non-existent.

The situation is relatively calm in the Armenian neighborhood, but a sense of uneasiness is crippling everyone. People are hardly able to cater for their direct household needs, without moving far from their homes.

Spokesperson for the Aleppo Prelacy Jirair Reisian informed Yerkir.am that under the auspices of the Prelacy, Armenian organizations have come together to provide help to community members. Catholicos Aram I urged Armenian communities worldwide to start fundraising.

The situation overall is very tense and both sides (Regular Syrian Army and opposition forces) are digging in for a decisive battle which may soon set the city ablaze.