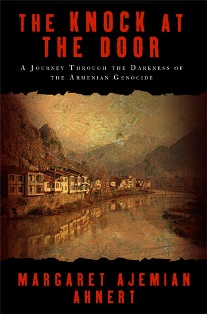 Memoir of Armenian Genocide sweeps World History Category
?
A book by Margaret Ajemian Ahnert
?
Synopsis:
In 1915, Armenian in Turkey were forced to change their religion, barred from speaking their language, and often driven out of their homes as the Turkish army embarked on a widespread campaign of intimidation and murder. In this riveting book, Margaret Ajemian Ahnert relates her mother Ester's terrifying experiences as a young woman during this period of hatred and brutality.
?
At age 15, Ester was separated from her foster family during a forced march away from her birth town of Amasia. Though she faced unspeakable horrors at the hands of many she met on the road, and was forced into an abusive marriage against her will, she never lost her faith, quick wit, or ability to see the good in people. Eventually she escaped and made her way to America.
?
Ahnert's compelling account of her mother's suffering is framed by an intimate portrait of her relationship with her 98-year-old mother. Ester's inspiring stories, told lovingly by her daughter, will give you a window into the harrowing struggle of Armenians during a terrible period in human history.
?
“The Knock at the Door is an inspired, beautifully written chronicle of one of the worst eras in human history. Had such books been written long ago, another Holocaust, which followed 25 years later, might never have happened.” says Robert Morgenthau, District Attorney for New York County, grandson of Henry Morgenthau, Sr., United States Ambassador to the Ottoman Empire during World War I
?
While historical documents abound, first-time author Margaret Ajemian Ahnert goes beyond the statistics and takes us on a personal journey in her book THE KNOCK AT THE DOOR: A Journey Through the Darkness of the Armenian Genocide, a skillful retelling of her mother?s traumatic battle to survive as a young girl coming of age in this period of brutality and hatred. From her room in an Armenian old age home in Queens, NY, Esther recounts in vivid detail the years-long journey from her once-happy life in Amasia to the shores of America, and as Margaret recounts the tales she first heard as a young child, she depicts too the strength of the loving relationship between mother and daughter.
?
Now this touching work has been honored by USA News as the Best Book of 2007 in the World History category.?
?
About the Author
Margaret Ahnert was born in New York City.? She received an MFA from Goucher College and a BA from Goddard College, and is a graduate of the Barnes Foundation. She has pursued a variety of careers including producing television documentaries, running a Pennsylvania hotel and resort, lecturing as a docent at the Metropolitan Museum of Art and the Philadelphia Museum of Art, and teaching art appreciation through the ?Art Goes to School? program in elementary schools. Ahnert holds a 100-ton master captain?s license and is an avid hunter and fisherwoman.?

ADDITIONAL READING:
?
Survival story: Author tells of her mother's triumph over Armenian genocide
?
By Hedy Weiss
?
On the final page of The Knock at the Door — Margaret Ajemian Ahnert's deeply personal evocation of the slaughter of the Armenians by Ottoman Turks between 1915 and 1917 — there is a photograph of the author's mother, Ester Minerajian Ahronian Ajemian.
?
Ester died in 1999, just a few weeks short of her 99th birthday. But she might very easily have perished while still a teenager. This book is a daughter's tribute to her mother — the story of how Ester not only escaped death, but triumphed over hatred and violence, and how she eventually began her life all over again in this country. In addition, it suggests why, nearly a century after the slaughter, passions remain so high.
?
Of course Ahnert's book has arrives at a fortuitous moment. There is great controversy swirling around the resolution now making its way through Congress — a bill that would officially designate the Armenian slaughter a “genocide” (and surely generate some additional tension in U.S.-Turkish relations). And within Turkey, highly respected writers and scholars who recently have attempted to raise questions about this ethnic catastrophe have felt the heat.
?
When, in 2005, the highly regarded Turkish writer Orhan Pamuk (recipient of the 2006 Nobel Prize for Literature) commented to a foreign newspaper interviewer about the mass killings of Armenians and Kurds in Anatolia, criminal charges were pressed against him (though subsequently dropped). As Pamuk noted: “Thirty thousand Kurds, and a million Armenians were killed in these lands and nobody dares to talk about it.”
?
What makes The Knock at the Door so compelling is its eye-witness quality. Though Ahnert makes it clear she based her story on interviews with her mother over a period of many years, and that she went on to shape the “words and the voice” heard in the book from her own imagination, there is an authentic ring about it all.
?
What also rings true to anyone who has read about the Holocaust, or about the more recent atrocities in Bosnia and Rwanda, is the way those who were once neighbors — and seemed to have carved out some form of multicultural coexistence — quite suddenly became the most bitter of enemies.
?
The scenario is familiar: Word of hangings in other towns, the disappearance of Ester's father; a mass flight set in motion that would result in an ethnic cleansing of Christian Armenians. Though some Armenians converted to Islam in an effort to remain unharmed, most refused. Fleeing long-established homes and businesses, they were either rounded up, murdered and tossed into mass graves, or died of starvation as they marched to what they hoped might be a place of refuge.
?
Ester was just 15 when she and members of her family set out to escape. Ultimately, she was the only one to survive, but along the way she endured rape, a forced marriage, beatings, isolation and much more.
?
Ahnert, who struggles to come to terms with this history herself, intersperses the chapters that recount her mother's ordeal with more contemporary sections that capture Ester's final years spent at an Armenian home for the aged in New York. To the very end, Ester showed no sign of bitterness, believing it was “God's job to judge.”
?
Hedy Weiss is the Sun-Times theater and dance critic.
?
Source: “Chicago Sun-Times”, October 28, 2007
http://www.suntimes.com/entertainment/weiss/623331,CST-BOOKS-ahnert28.article
?
THE KNOCK AT THE DOOR:
A JOURNEY THROUGH THE DARKNESS OF THE ARMENIAN GENOCIDE
By Margaret Ajemian Ahnert
204 pages, $24.95
ISBN: 978-0-825305-12-2
Format: Hardcover
Publishing Date: 24 April 2007
Publisher: Beaufort Books.?