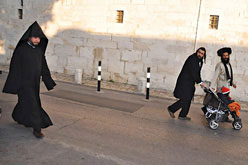 Clergymen in the Armenian Church in Jerusalem say they are victims of harassment, from senior cardinals to priesthood students; when they do complain, the police don't usually find the perpetrators.

Ultra-Orthodox young men curse and spit at Christian clergymen in the streets of Jerusalem's Old City as a matter of routine. In most cases the clergymen ignore the attacks, but sometimes they strike back. Last week the Jerusalem Magistrate's Court quashed the indictment against an Armenian priesthood student who had punched the man who spat at him.

Johannes Martarsian was walking in the Old City in May 2008 when an young ultra-Orthodox Jew spat at him. Maratersian punched the spitter in the face, making him bleed, and was charged for assault. But Judge Dov Pollock, who unexpectedly annulled the indictment, wrote in his verdict that “putting the defendant on trial for a single blow at a man who spat at his face, after suffering the degradation of being spat on for years while walking around in his church robes is a fundamental contravention of the principles of justice and decency.”

“Needless to say, spitting toward the defendant when he was wearing the robe is a criminal offense,” the judge said.

When Narek Garabedian came to Israel to study in the Armenian Seminary in Jerusalem half a year ago, he did not expect the insults, curses and spitting he would be subjected to daily by ultra-Orthodox Jews in the streets of the Old City.

“When I see an ultra-Orthodox man coming toward me in the street, I always ask myself if he will spit at me,” says Narek, a Canadian Armenian, this week. About a month ago, on his way to buy groceries in the Old City, two ultra-Orthodox men spat at him. The spittle did not fall at his feet but on his person. Narek, a former football player, decided this time not to turn the other cheek.

“I was very angry. I pushed them both to the wall and asked, 'why are you doing this?' They were frightened and said 'we're sorry, we're sorry,' so I let them go. But it isn't always like that. Sometimes the spitter attacks you back,” he says.

Other clergymen in the Armenian Church in Jerusalem say they are all victims of harassment, from the senior cardinals to the priesthood students. Mostly they ignore these incidents. When they do complain, the police don't usually find the perpetrators.

Martarsian left Israel about a year ago. He was sent back home by the church, as were two other Armenian priesthood students who were charged after attacking an ultra-Orthodox man who spat at them.

The Greek Patriarchy's clergymen have been cursed and spat on by ultra-Orthodox men in the street for many years. “They walk past me and spit,” says Father Gabriel Bador, 78, a senior priest in the Greek Orthodox Patriarchate. “Mostly I ignore it, but it's difficult.

Sometimes I stop and ask the spitter 'why are you doing this? What have I done to you?' Once I even shouted at a few of them who spat at my feet together. They ran away,” he says.

“It happens a lot,” says Archbishop Aristarchos, the chief secretary of the patriarchate. “You walk down the street and suddenly they spit at you for no reason. I admit sometimes it makes me furious, but we have been taught to restrain ourselves, so I do so.”

Father Goosan Aljanian, Chief Dragoman of the Armenian Patriarchate in Jerusalem, says it is often difficult for temperamental young priesthood students to swallow the offense.

bout a month ago two students marching to the Church of the Holy Sepulchre beat up an ultra-Orthodox man who spat at them. They were sent away from the Old City for two weeks.

“I tell my students that if they are spat at, to go to the police rather than strike back” says Goosan. “But these are young kids who sometimes lose their cool.”

A few weeks ago four ultra-Orthodox men spat at clergymen in the funeral procession of Father Alberto of the Armenian Church. “They came in a pack, out of nowhere,” said Father Goosan. “I know there are fanatical Haredi groups that don't represent the general public but it's still enraging. It all begins with education. It's the responsibility of these men's yeshiva heads to teach them not to behave this way,” he says.

Father Goosan and other Patriarchy members are trying to walk as little as possible in the Old City streets. “Once we walked from the [Armenian] church to the Jaffa Gate and on that short section four different people spat at us,” he says.

Newer PostAshot Ghazaryan: No matter how much humor I use, I never offend anyone's dignity
Older PostNew book by Dr. George Bournoutian on Armenian historical presence in Karabakh