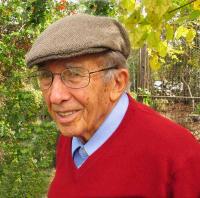 The late J. Michael Hagopian escaped the mass murder that claimed the lives of as many as 1.5 million Armenians. Through his 12 films, the atrocity will remain visible to all who are willing to see.

Most who suffer unspeakably at the hands of others look for ways to forget, to resume a normal life as best they can. Some, however, assume the duty of witness in the hope that truthful memory will protect those who come after them. The passing of these heroic men and women ought not to go unremarked upon.

J. Michael Hagopian, who died this month in Thousand Oaks, was one such man. He was just 2 years old in 1915, when his parents hid him in a well behind their home because they believed they were about to be killed by Ottoman Turkish soldiers, who were massacring Armenians across eastern Anatolia. The soldiers ultimately passed them by because the boy's father, a physician, had treated his Turkish neighbors. The Hagopians immigrated to Fresno, escaping the mass murder that claimed the lives of as many as 1.5 million of their fellow Armenians in the 20th century's first genocide.

The toddler who was sheltered in a well went on to earn advanced degrees from UC Berkeley and Harvard and to become a distinguished teacher at UCLA and Oregon State. His great contribution, though, was a series of 12 moving ? indeed, heartbreaking ? films documenting the attempted genocide of his people. The most sweeping of these, “The Forgotten Genocide,” was nominated for an Emmy in 1976. He appeared in one of his own films, “Voices From the Lake,” recalling that his mother had told him, “You can kill a people, but their voices will never die.”

The voices of the Armenians still are struggling to be heard in some quarters. Contemporary Turkey, which has no political connection to the Ottomans, continues to defy history and decency, and denies the mass murder was the result of anything but wartime civil strife. It is a claim refuted by every serious observer in that period. Raphael Lemkin, the Polish lawyer of Jewish descent who coined the term “genocide” in 1943, began his lifetime's work on the subject by studying the organized murder of the Armenians and that of Iraq's Assyrians in 1933.

Thanks to an agreement Hagopian reached last spring with USC's Shoah Foundation, his vast archive of firsthand testimony by Armenian genocide survivors and witnesses to the Ottoman atrocities will be preserved and made available for study by scholars. Because of his courage and the Shoah Foundation, the voices of the Armenians will continue speaking to all who are willing to listen.