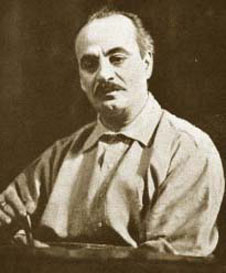 By Melania Badalian
?
“The Prophet” by Gibran Khalil Gibran (also known an Kahlil Gibran) was written in English in 1923, New York. Lebanese Armenian poet and critic Vahe Vahian translated the book into Western Armenian in 1984. He wrote in the preface of the book that the ideas of the great Lebanese poet are shaping a kind of a spiritual movement.
?
Gibran managed to combine the Western cultural values, Christian thinking and wisdom of the East in his writings. He was born In Lebanon, later he moved to USA and then lived in Europe. This factor greatly influenced his philosophy, as well as poetry and painting. He was also greatly influenced by William Blake, the English poet. He also supported the ideas of Nicshe.
?
Gibran wasn?t accepted in his motherland. His “Rebelliant Souls” and “Maremaids of Gorge” were burnt in the main square of Beirut. The poet died when he was only 48. He left rich literary heritage in English and Arabic, including such books as “Broken Wings”, “The Madman”, “The Spirit Brides”, “The Eye of the Prophet”, “Jesus, Son of Man”, “Tears and Laughter” and others.
?
“The Prophet” poem became his creative masterpiece written under the influence of the Oriental mystical theories and the Bible combined with the individual spiritual experience of the poet.
?
The recent translation of “The Prophet” into the Eastern Armenian was published by the assistance of the Lebanese Embassy to Armenia, with the support of Pierre Fattoucher, Chairman of the “GH-Telecom” Board, and Ralph Yirikian, Head of VivaCell company.
?
Hovik Yordekian made the translation of the book from the Western into the Eastern Armenian. The publication was to commemorate the 100 anniversary of the poet. It?s worth mentioning that the earlier Western Armenian translation of the poem includes contributions by Anoushavan Tanielian, Khachik Derderian, Vazken Etimelian and Hrach Sarkisian.
?
Source: “Azg” Armenian Daily, 15 June 2007 (adjusted)
http://www.azg.am/?lang=EN&num=2007061507

ADDITIONAL READING
?
Gibran Khalil Gibran (January 6, 1883 ? April 10, 1931) was a Lebanese American artist, poet and writer. He was born in today's Lebanon and spent much of his productive life in the United States.
?
“The Prophet” is a book of 26 poetic essays written in English in 1923 by Gibran. In the book, the prophet Almustafa, who has lived in the foreign city of Orphalese for 12 years, is about to board a ship which will carry him home. He is stopped by a group of people, with whom he discusses many issues of life and the human condition. The book is divided into chapters dealing with love, marriage, children, giving, eating and drinking, work, joy and sorrow, houses, clothes, buying and selling, crime and punishment, laws, freedom, reason and passion, pain, self-knowledge, teaching, friendship, talking, time, good and evil, prayer, pleasure, beauty, religion, and death.
?
It is one of Gibran's best known work, followed with “The Garden of The Prophet”.